Ashlie and I went back and forth on who would write our last post, Coming To Grips With A Tragic Past. We both had much to say, but my vote was, since I’d been to these places before, she share her first impression of being introduced to such unnecessary evil. Though experiencing the Genocide Museum and the Killing Fields was equally as heartbreaking for me the second time, something deep in your soul’s foundation shifts while walking through those halls and above those mass graves for the first time.

Following her post a friend of mine sent me two emails I’d sent him during my first time here in 2009. Aside from sharing just how devastated I was by learning what went on, the other point I adamantly conveyed was how in awe I was with the beauty, spirit and resiliency of the Cambodian people.

Aside from East Timor and the Philippines, I’ve been to every other country in SE Asia. This region of the world’s rich and ancient cultures have strongly impacted  my evolving perspective on life. Though there are certainly other parts of the world that struggle and thrive under similar circumstances, it is here where I feel so moved and motivated by history, spirituality and culture. Pristine turquoise beaches, emerald green rice fields and some of the best street food on the planet only highlight the experience. 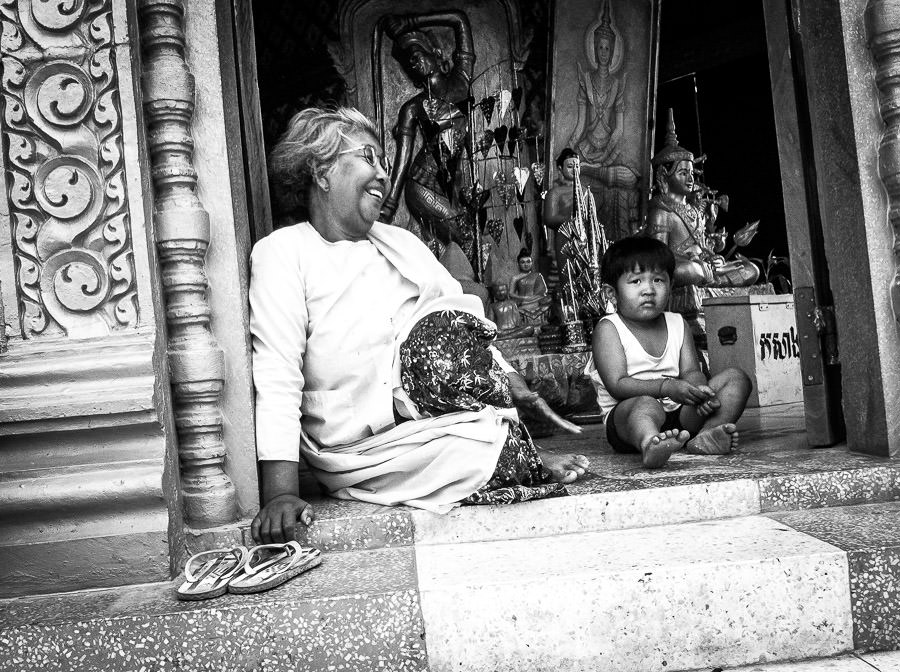 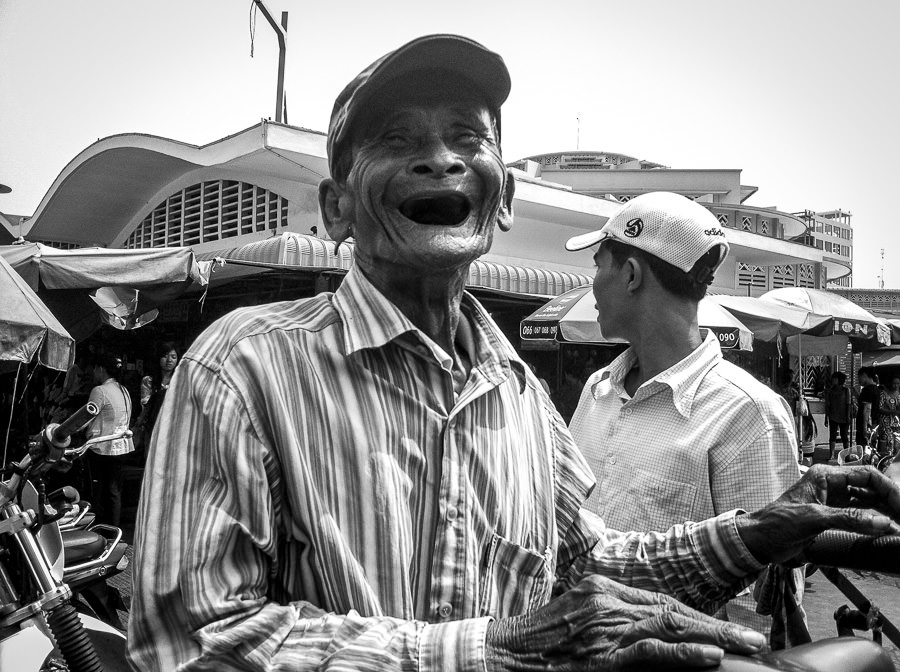 Except in areas that have been invaded by tourism, SE Asians are some of the most friendly, hospitably kind people around the world. But, there is something undeniably different about Cambodians. How could there not be? This is a country that was colonized and ruled by the French for almost 100 years (1863-1953). This is a country that’s been used and abused by its neighbors for centuries, 1/3 of Cambodia’s original territory is now part of either Thailand or Vietnam. More recently, it was only 33 short years ago that, by the hands of its own people, Cambodia had ¼ of its entire population systematically enslaved, tortured and exterminated. Consequently, the ill effects of colonization, infiltration and genocide are still blatantly measurable.

This country is among the world’s highest burdened by child malnutrition. It is one of only thirty-three countries labeled with “alarming” levels of hunger. The visually contrasting gap between the haves and have-nots is dreadful to witness. Heavily polluted streets are roamed by small packs of young orphans numbing themselves silly by inhaling plastic sacks containing open cans of glue. 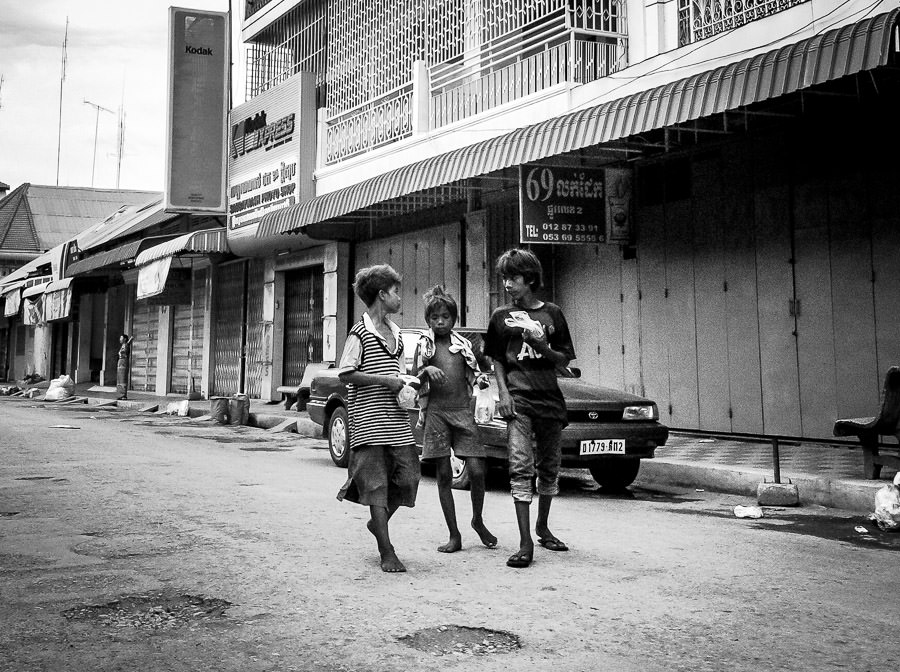 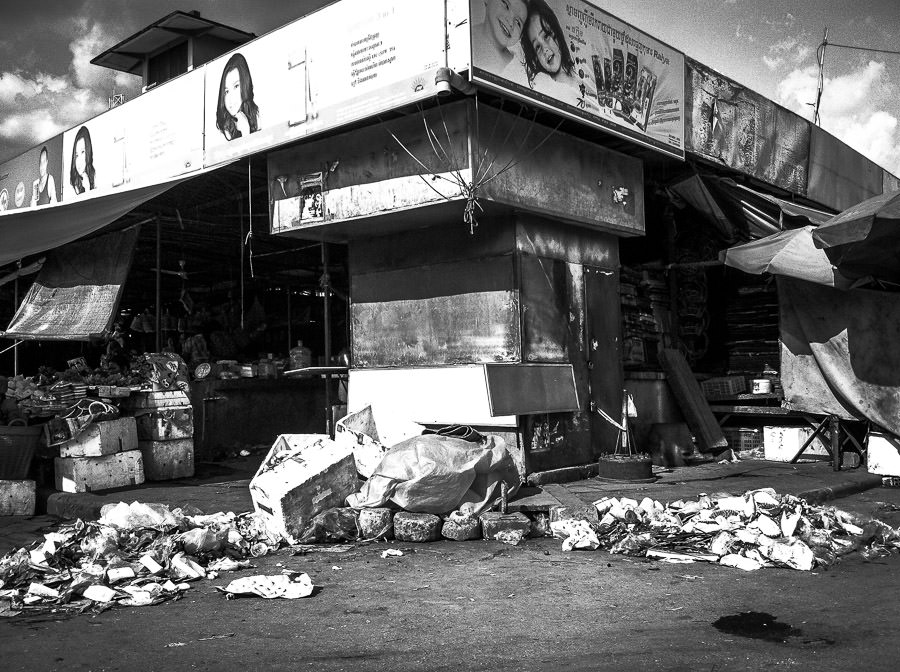 Over the last 3 weeks we’ve heard story after story explaining the shockingly common occurrences of corruption here, on all levels. I’ve yet to hear one Cambodian friend mention the word government without following it up with ‘bad’ or ‘corrupt.’ Stories of the current regime’s method of continuing to win elections are, in the words of one local friend, ‘embarrassing and humiliating.’ In short, Hun Sen, Cambodia’s prime minister, is the second-longest serving leader in SE Asia and is one of the longest serving prime ministers in the world.

Continuing to dominate elections, he’s been in power since 1985.

Ashlie befriended a Cambodian student at the bus stop a few days ago whose entire village is unable to vote due to their voting rights being ‘arrested.’ Most everyone in her particular village is educated and loyal to Hun Sen’s opposition, The NRP (National Rescue Party). Hun Sen is often referred to as a Vietnamese puppet and those with Vietnamese blood here in Cambodia vote for him twice. Once registered with their Vietnamese name and once registered with their Cambodian name – or with the ballot of someone else’s whose name has been flagged or arrested. If a particular village votes against Hun Sen, the entire village will no longer receive generators for electricity or funding for roads and schools. 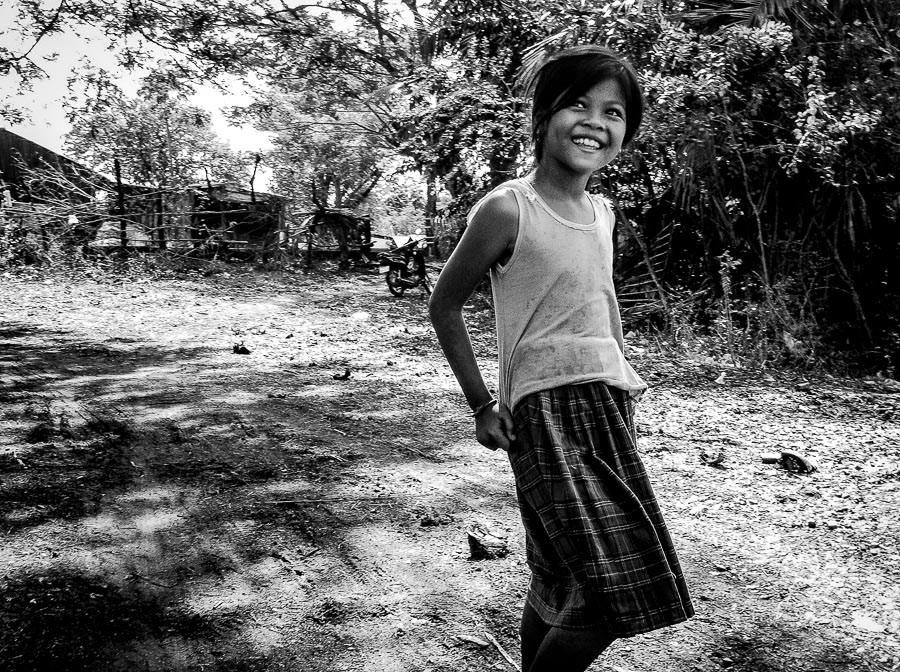 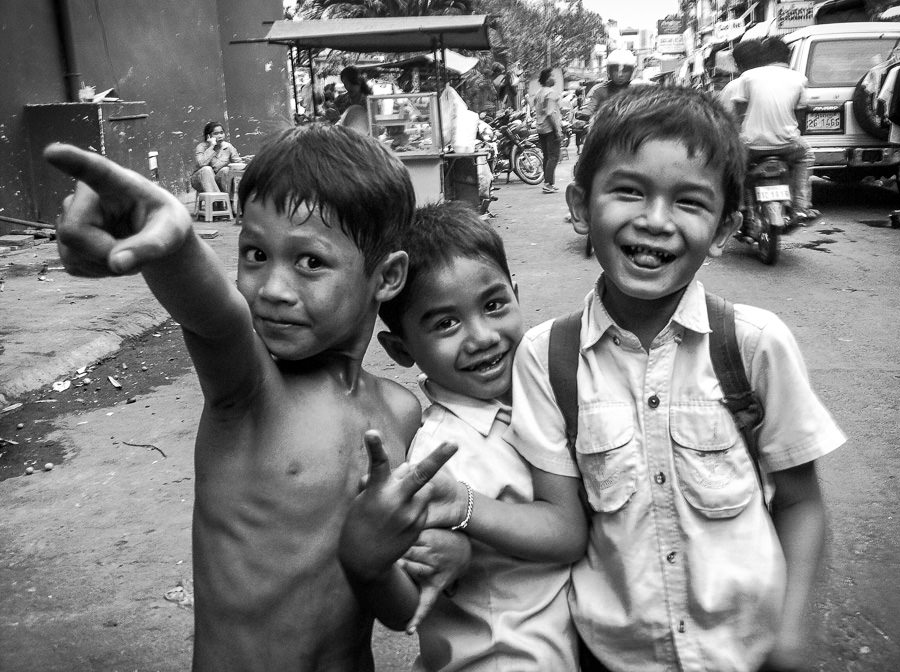 Though Cambodian public schools are free, they are not without cost. To quote Van Dong, our friend who recently stepped down from being a monk after twenty-two years, “School is free, but expensive”. Teachers, who only make $50 to $60 a month, turn to extortion to increase their monthly income, only teaching the material in which students will be tested on to those children who make a large enough monetary donation (500-1000 Riel / .15 -.25 cents per day). With one in every three Cambodians living beneath the poverty line, the vast majority of students’ parents are unable to afford their child’s free education. And if your child happens to be clever enough to still pass their exams without having paid the donation, the teacher still will not give the student a passing grade. Sad. But true.

It is common knowledge that police officers, who also make around $60 a month, post up on side streets to pull locals over and erroneously give tickets that must be paid on the spot. Day before yesterday, one of our tuk-tuk drivers told us that when he gets stopped while drunk, it only costs 10,000 Riel / less than $3.00, to have him back on his merry way.

In order for Cambodians to be considered for a particular job or a promotion, a healthy donation must be paid to those making the hiring or giving the promotion, this happens at all levels. These sorts of corrupt behaviors are widely out in the open, and sadly, locals speak righteously when enthusiastically explaining that, as long as the government does not change, the disturbing levels of corruption here will never change. However, Cambodians don’t necessarily consider the corruptors on the lower level to be bad people. They understand that those exploiting on the street level are doing so to feed their families. As one of our friends in Battambang, Nicky, jokingly yet not so jokingly, tried to convey, “We (as Cambodians) have No Choice!” 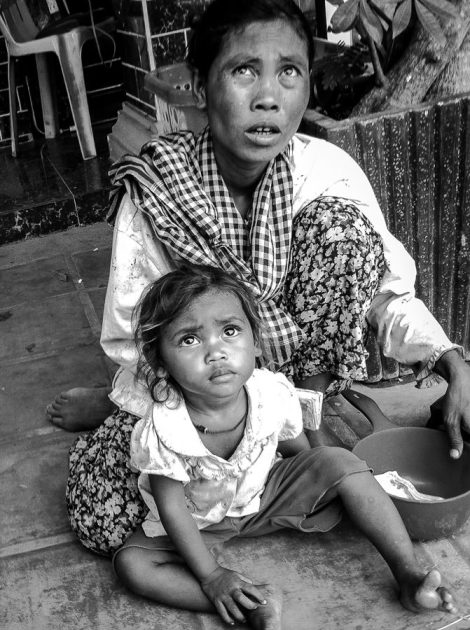 Once you’ve been educated on what these people have lived through, once you witness the country’s current conditions, you hear the heartbreaking stories of the past mixed with stories of the present where hundreds and hundreds of thousands of families are working backbreaking 10-12 hour days under the relentless rays of the sun for the equivalent of two dollars. Then those same families are unable to send their kids to school because they don’t have enough food to eat and an extra dollar a day for their child’s labor is mandatory to avoid malnutrition, or the parent doesn’t make enough money to pay for the child’s free education, further contributing to a country’s system that perpetuates and maintains a certain level of unavoidable ignorance. It’s heartbreaking. On all levels.

So, the question that begs to be asked is how can a country that was reigned by the terror of its own people, a country whose peoples’ heads are still being held under water by the hands of its corrupt ‘leaders,’ a country that is plagued by poverty and all the nastiness that accompanies it, still be able to capture the hearts and souls of so many foreign visitors?

The answer is easy. The People. When you are in Cambodia there is no hiding from the truth. No escaping the unfortunate stories of struggle and sadness. The poverty, pollution and stench, the hunger and homelessness, the corruption and exploitation. It is all, without apologies, in your face. 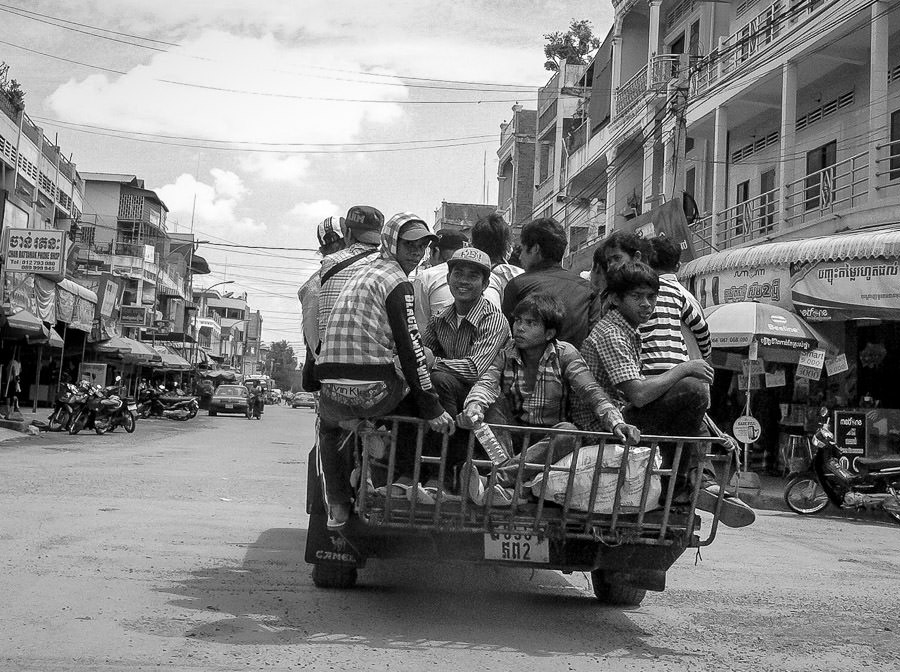 But, once you’re confronted with those day laborers who seem inhumanely crammed in the back of a truck like sardines, or the street kids whose bare feet are black and blistered from afternoons of begging on boiling blacktop, or the elderly whose deeply scarred skin implies years of torment and torture, once you make yourself open and available to Cambodia’s seemingly suffering society, you will feel a welcome into their world that is minus any expectations in return.

There is a kind and genuine gentleness in the hearts of this young, resilient country that, given the years of brutal circumstances, seems unwarranted and unexplainable. It has once again, four years later, abruptly forced me to recognize how fortunate my life has been, and how unappreciative I can be. After all Cambodians have been through, what they still are going through, how can these people be so resilient, so open and so generous? They share, tease and dance with one another as if they were living under some of the most fortunate circumstances in the world. It’s an astounding testament to the heart and soul of human beings, and Cambodians in particular. One that I will forever be compelled to share, and wishfully have the opportunity to come back to for the remainder of my traveling days.

About the Author
Adrian was born and raised in Dallas, Texas. After graduating from the University of North Texas in 1999 he spent that summer backpacking throughout Western Europe. The exposure to new customs, cultures and languages opened up a whole new world and appreciation for all things foreign. Since that time he's traveled 5 of the 7 continents and had his passport stamped in over 50 countries.
Social Share
5 Comments