Then motioning at me, You, me no problem. You, no. He! He cheat man!

Let’s get out of here now, Ashlie whispered with clinched teeth.

We locked arms and stormed passed the plume of his alcohol fueled breath.

A shockingly volatile screaming match ensued behind us. Raj assertively led us up and out from tent-city for the last time. Loud enough for the entire neighborhood to hear, Raj’s mom and the yellow-shirt violently shouted at one another as they trailed us up into the streets. Once again, we were being followed.

Ashlie, Raj and I scattered and skipped through the traffic. Back on the opposite side of the road, yellow-shirt was now being harassed and swung at by a handful of women that had chased him up from the tents. He aggressively returned the favor, however too drunk to connect on any of his targets. The scene was more than enough to attract the attention of the police officer sat outside the same ATM I’d gotten my money out from . Yanking him up, down and sideways, the cop removed the dingy, yellow-shirted man from the dramatics of this equation once and for all. 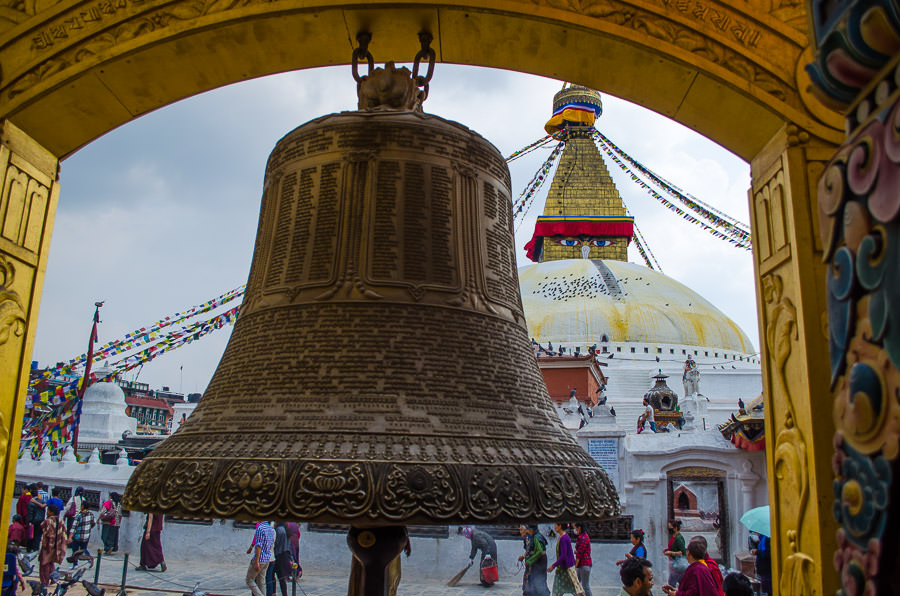 Now inside the holy, peaceful surroundings of Boudhanath stupa, my body was gushing with frustration. Ashlie and I locked eyes, unsure of how to even begin digesting what had  just happened.

Still not having made our donation to the family, Raj, and now his mother, were again not far behind.

As his mom stood back, still forming her hands into the shape of a small box, we sternly confronted Raj with a barrage of questions. For as adamantly dangerous Raj claimed this man was two days before, to see him down in tent-city scared us both to the core. Tent-city is a 40 minute taxi ride from Kathmandu, how did this guy suddenly show up where we were, at the time we were there? I felt like choking the truth out of Raj, however he stuck to his guns. Claiming that this man bullies him into forking over small amounts of money on a daily basis. A tax, if you will, for the Indian Raj to be hustling on the streets of Nepal.

That scenario certainly seemed possible as Raj was meek and sweet natured and the bully appeared to be the brutal opposite.

I’m done, Raj. Give this money to your mom and you guys use it however the hell you want. It’s this .. or it is nothing.

With the 1000 rupiah note gripped tightly in her dirty, wrinkled left hand, the mother said good-bye and exited the stupa.

Raj, deep down, is a good kid. I wholeheartedly believe that. Whether he looked at Ashlie and I as targets our entire time together is something we’ll never know. I choose to believe he saw the same good in us that we saw in him.

Even after giving his mom the money, he wanted to educate us by explaining the history of the stupa. But I was uninterested in battling the questions that having Raj next to me created. I was done. Finished. Cooked.

Raj, I’m sorry. We really want to be alone. We thank you for lunch and will meet you in the city tomorrow to give you prints of the photos we took today.

My family will be very happy for photos. I very sorry for everything that happen today. I hope that you and Ashlie are happy and not angry for me. Hope so much to see you tomorrow. 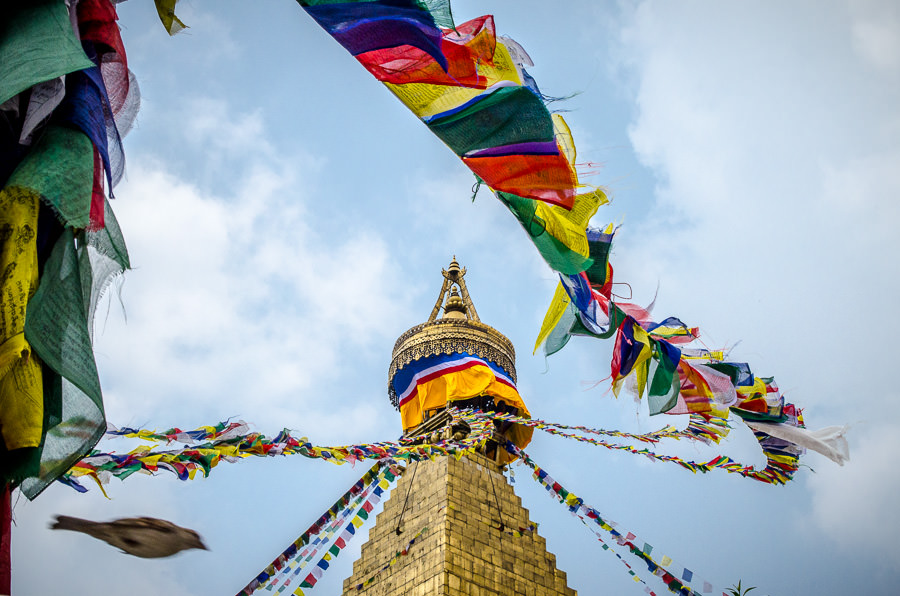 Minus much conversation, Ash and I spent the next couple of hours decompressing under the stupa’s thousands of stringed up prayer flags. Even being surrounded by such a strong flow of spirituality, I couldn’t stop questioning everything. My wheels would not stop spinning.

Were we simply the victims of a cleverly orchestrated scam? Or did we just shoot down the opportunity of changing a family’s life forever? Scam or no scam, should we have just bought Raj that damn shoebox?

Being in the midst of that saddening slum, multiplied by the confusing chain of events the day before, took its toll. Ashlie and I both woke up the next morning with emotional hangovers. Knowing that we were meeting Raj later that afternoon, we still struggled with whether or not we should do more (sympathy is one powerful emotion). 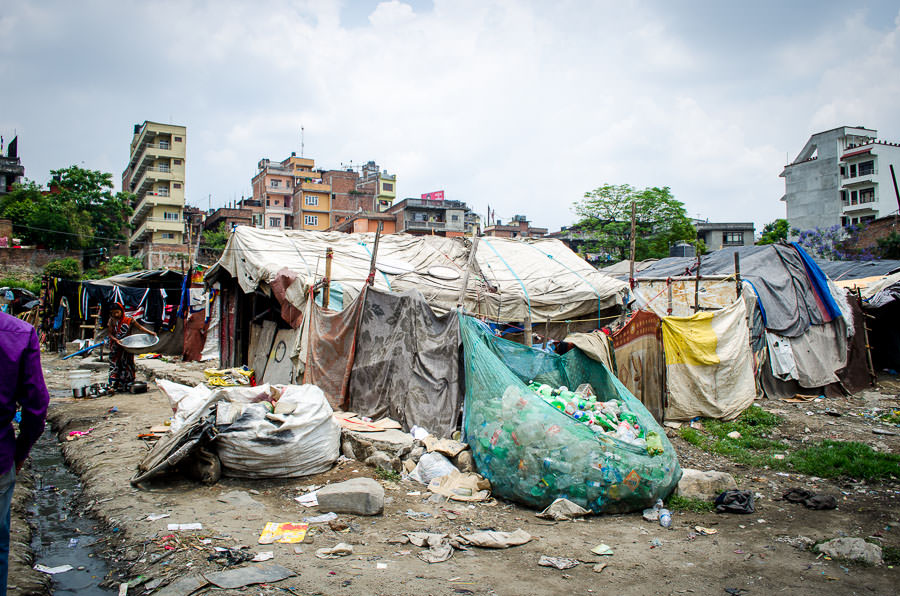 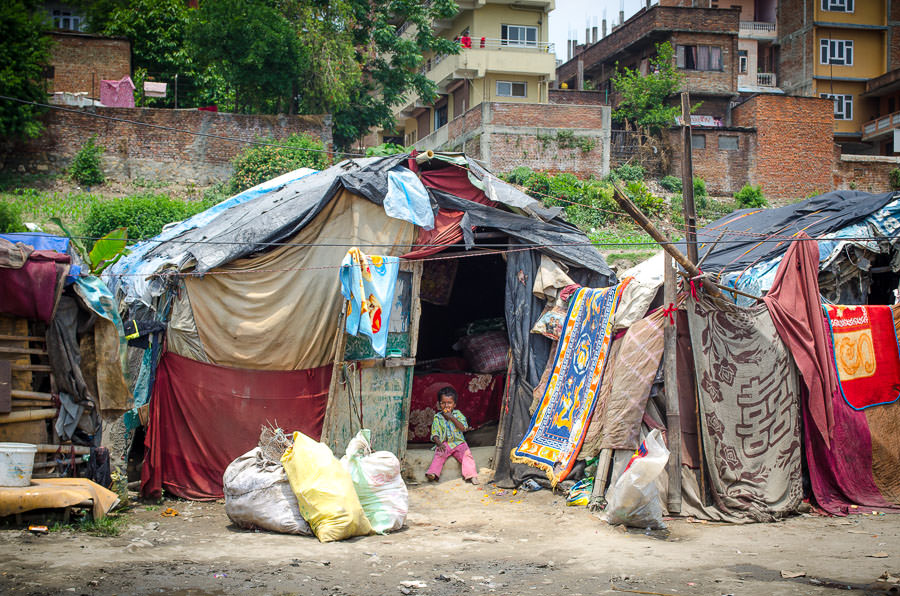 Was I being naïve? Maybe. The possibility of this being one big con couldn’t be denied. But, no matter if this was a professional hustle or not, we recognized Raj and his family as humans – and the conditions they’re all living under are simply inhumane. Following hours of deep debate and discussion we decided that we had compensated Raj and his family enough. That small shoebox was not to be our responsibility.

Photos in hand, later that afternoon we met Raj on one of the many city’s loud, clustered corners.

As always, his big, happy smile revealed his tattered teeth.

I worry you not coming. I would have waited here all night, he loyally announced.

The photos were wrapped up in the usual gold and white photo processed envelope (we’d also included a thank you note to his family. And extra 1000 rupiahs. Yea, just because).

As he opened the envelope to look at the photos he spotted the money, No Money, he belted out.

I don’t want your money, Adrian. I don’t.  I just want small shoebox.

With him trying shove the bill back my way I grabbed his right forearm and firmly pressed it back against his body.

A few minutes of well wishes and it was time to leave Raj for good. We all hugged and his eyes once again swelled with tears. Thank you, God bless you for all your life.

Even if we’d been hustled, somehow, unexplainably, we adored this little shit. 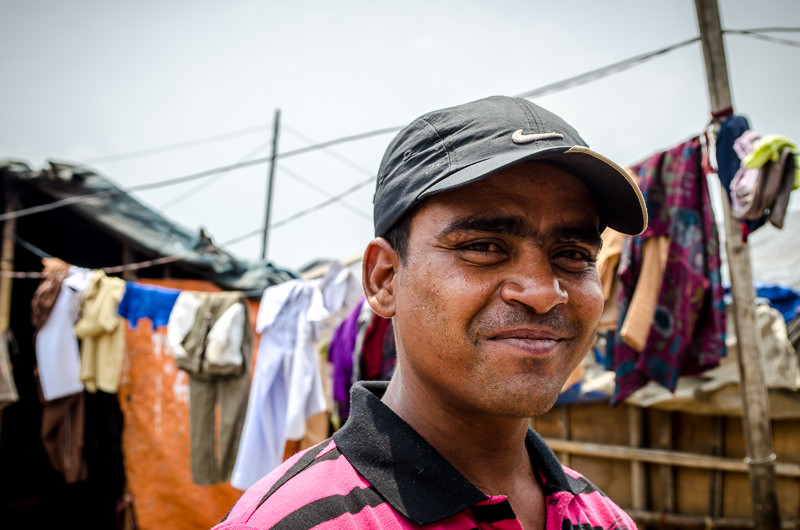 My Adam’s apple bulging in the back of my throat, we turned and walked away.

Peeking out from the corner of my eye, I spotted Ashlie’s bottom lip quivering.

She stopped, buried her face into her palms and burst into tears. Her flow of emotions seemed uncontrollable and my own quickly followed.

So, there it ended. Us emotionally drained from the inside out, standing in one of Kathmandu’s dark, crowded alleyways – sympathizing for this young man who had just stolen small pieces of our hearts.

*Check out this excellent article about Travel Scams Around The World

About the Author
Adrian was born and raised in Dallas, Texas. After graduating from the University of North Texas in 1999 he spent that summer backpacking throughout Western Europe. The exposure to new customs, cultures and languages opened up a whole new world and appreciation for all things foreign. Since that time he's traveled 5 of the 7 continents and had his passport stamped in over 50 countries.
Social Share
33 Comments