The Most Devastating Day Goes On

You can read part one of the saga here – The Most Devastating Day In All My Travels.

I’m not sure I’d ever felt so violated. Internally, everyone there became a suspect. We only had two hours before we were to pack up, leave the village and hike our way back up towards Sapa. I immediately began sizing each of the other eight up – knowing that my phone was undoubtedly somewhere near. With everyone pacing around what instantly became very small quarters, as each passed by my brain found reason to believe it was that particular person who stole my phone. As Francois, the French traveller, walked passed, even as well as we got on the night before, he had my phone. When the brother, who sat squatted in the corner wearing the most emotionless face humanly possible looked up at me, he had it. The mother, whose devious cracked smile never left the corners of her mouth, continued to search feverishly beneath old, dusty magazines and other crap, her behavior way too suspicious for her not to have it. So many thoughts and possibilities darted through my brain.

The two tour guides are also from the Hmong minority group, which was an angle of this whole ordeal that certainly didn’t play in my favor. These people are a community. They have been for centuries. They work hard. They work together. Even more so, they wholeheartedly believe in saving face. Something so entrenched into this culture that it’s difficult for westerners to understand. I knew my only chance of ever seeing my phone again hinged on a close-knit family that knew or cared very little about me, and even less about the contents of my phone. 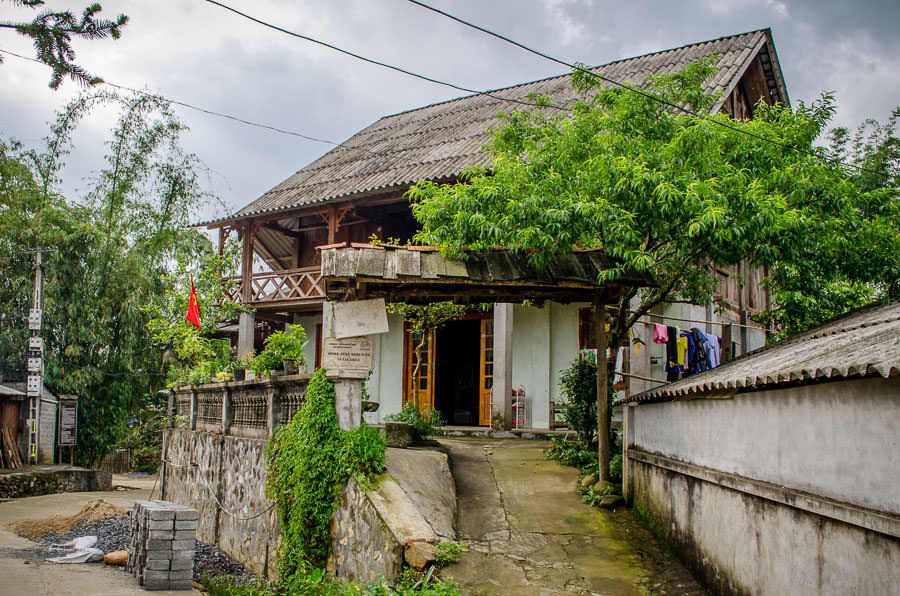 At one point, with all six of them in the dining area together, I crouched down, put my hands on my knees and pleaded with my guide, asking that she convey my message to the rest. I don’t care who did it, why they did it, if it was on purpose or an accident. I’ve got irreplaceable photos on that phone. I want them badly. I am willing to pay. I’m willing to give my word that I’ll not say anything about any of this to your agency or within any of the online travel forums. I just want my phone back.

After her translating my words to the Hmong family our guide, Mao, translated their response. They are very sorry for what happened but it must have been someone from the village who broke into the house and took your phone. This is the only thing that could have happened. It happens sometimes like this in villages around this area, Mao explained.

My phone was black, with a black case. It was not in an easy place to find, especially during the black hours of the night. But, what was much easier to find was the family’s big, silver laptop – which was sitting not far from where my phone was. How did they explain that? Maybe the villagers who come in don’t take from the local people, that is why they didn’t steal the laptop. Mao stoically proposed. 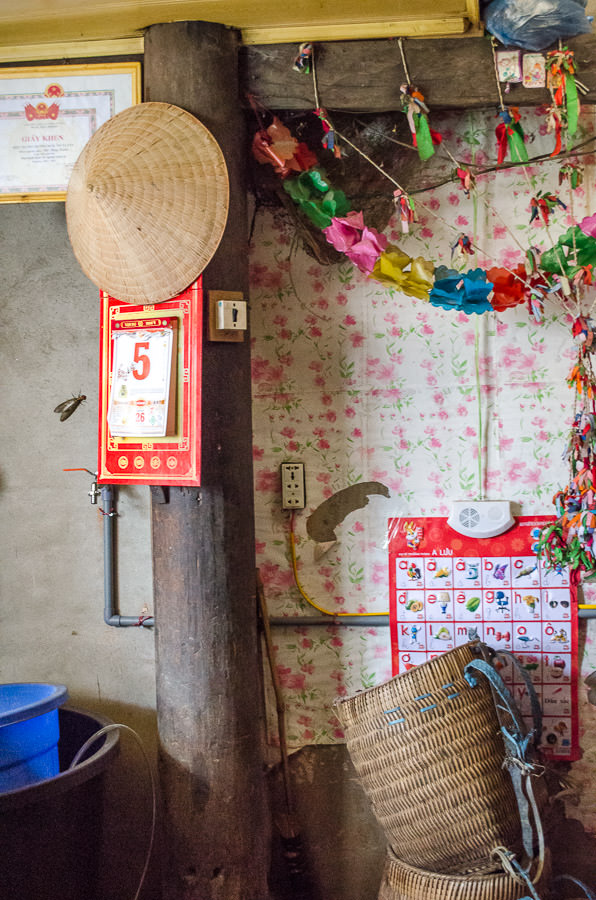 With the cultural binds that tie them, Mao, nor the French couple’s guide would even remotely consider suggesting it be someone from the family. The lines were drawn and it was both guide’s opinion that I forget about my phone. I’m really sorry but it’s gone and you won’t get it back. Even if someone here did take it, they will never admit it, it is not in this culture.

Francois and Marie are traveling with an iPad. He suggested that we go next door and use the coffee shop’s wifi to download an Apple application that could locate my phone. But, because my battery was dying the night before I’d switched my phone to Airplane Mode, and I’m not using the phone as a phone, so I’d also shut off any network availabilities – seemingly eliminating any shot of a phone tower or satellite’s ping. Plus, I did not have the ‘Find my iPhone’ app installed. The offer was much appreciated and allowed me to cross them off the list of suspects, but with those chips stacked against me, it was just too far fetched of an idea.

Around 6:30 a.m. the sister, Kem, the only family member with a genuinely sweet demeanor, and the one who had cooked us dinner the night before, flagged down the white village minibus speeding by that would take her up to Sapa where she worked. She was the first member of the immediate family to leave the scene. And honestly, she was the least of my concerns. 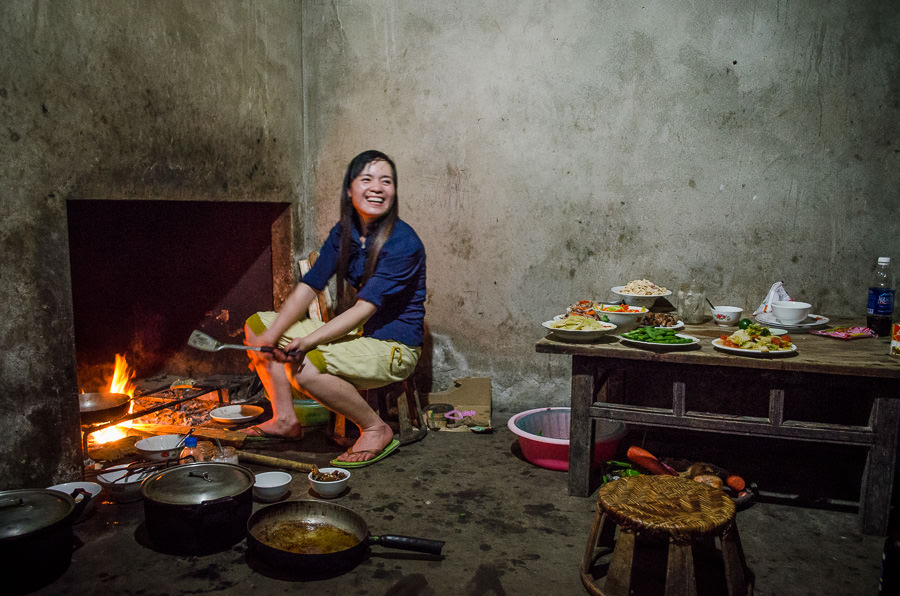 About an hour later while we sat and drank our coffee, the mother took off for the market on her motorbike. Then the brother leaves on his motorbike moments later. But, before leaving he said to Mao that he’d go to a shop there in the village to see if anyone had sold my phone to them. My hopes immediately shot into the sky. Did this guy have a moment of humanity and realize just how important my phone was to me? Did he have my phone and was going to pretend like it was stolen and then sold to the shop? I didn’t care. I was willing to pay for it either way. We waited for almost an hour for his return. But, he never returned. Mao then says to me that it was the mother who was going to the phone shop, not the brother. Fishy. Moments later the mother pulls up the driveway on her motorbike with nothing more than a clear plastic bag stuffed with bloody meat. She’d been to the market only. The phone shop was closed, she said to Mao. Their day was carrying on like nothing had happened.

Mentally coming to terms with the facts, my frustration and disappointment started to set in. I’d given Francois my Apple ID and to his credit, he’d downloaded the app to his iPad and tried to locate my phone. Predictably, there was no signal. We were literally in an area of Vietnam that was off the grid. Even if my phone were in my pocket, I highly doubt it would have pulled up on the map.

It wasn’t long before we were all to part ways and begin our day’s worth of hiking and sightseeing. Something that became a dreadful thought for me. Though breakfast was included and to be served shortly, I’d lost my appetite and welcomed the opportunity to let a cool shower decrease my blood pressure.

While Ashlie, Marie and Francois ate pancakes in one room, the mother, two guides and sister-in-law sipped rice porridge in the next. In a final attempt to plea with the family I once again explained I didn’t care who took it and I was willing to pay good money to have my phone back. Mao, please explain this to your people. Please. She said whatever she said in their mother tongue and they continued to eat. Not so much as a glance my way. I so very sorry Adrian, they don’t know anything about your phone.

My heart and soul were bruised. Two and a half hours of frustrating disgust. Ashlie and I were both devastated. She knows all too well how important all the photos, notes and other information not yet backed up to my hard drive were to me. We still have seven full months of travel left and not having my phone puts my own website at immediate risk.

I looked out from the homestay’s balcony onto this small minority community before me. I couldn’t suppress the feelings of distrust and prejudice towards every Hmong villager in my sight.

I was numb to the beauty of what my eyes could see. Picture-perfect rice fields engulfed by gigantic mountains meant nothing. As deflated as I felt, it was time. Time to cut my losses and lick my wounds. Time to move on.

But then, suddenly, I heard my name being called out from the street. Adrian? Adrian! Francois’ thick French accent shouted from below. Where is Adrian?

Flying down those stairs I rounded the corner toward the street where Francois stood with his iPad screen turned towards me, Look Adrian, it’s your phone. It’s showing up on the map! 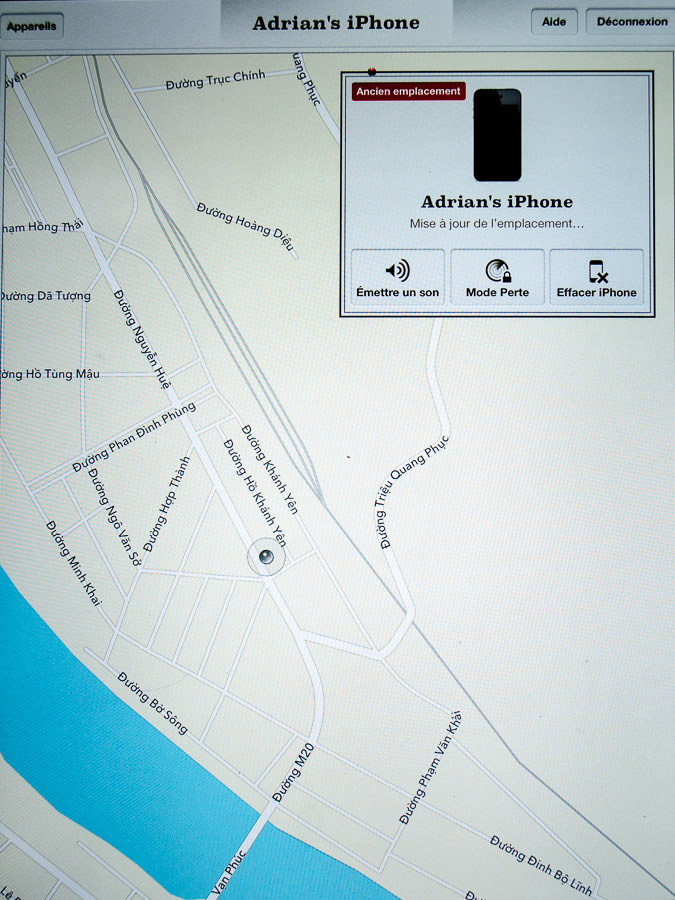 I’m not a fan of stringing this thing along, but being in the midst of a two-week Vietnam tour we are moving fast and our days are filled and scheduled. After a night’s stay on the countryside, I’m writing this while in a car back to Hanoi. We’ll be on a boat for the next three days and then on a night train back down south. The next and final chapter will close this roller coaster ride out. 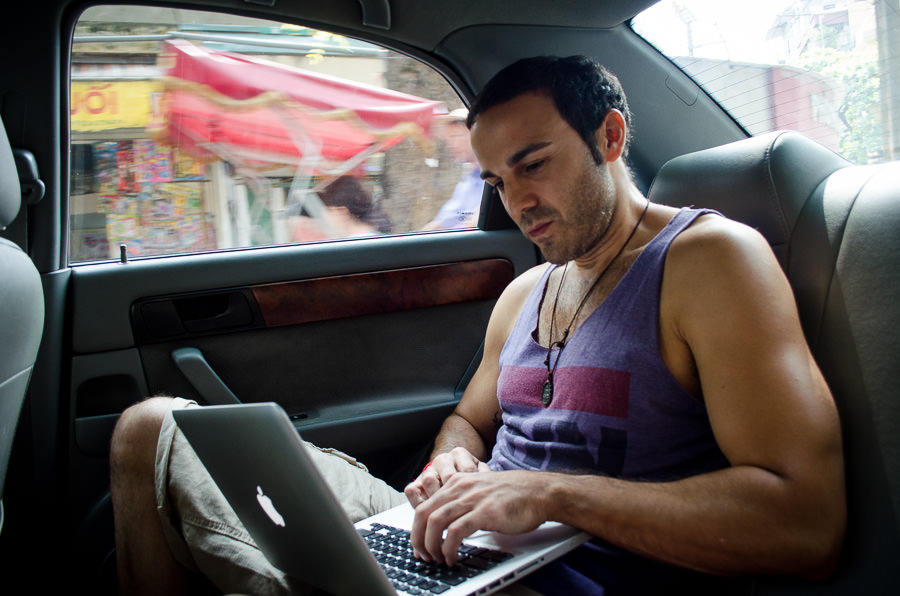 About the Author
Adrian was born and raised in Dallas, Texas. After graduating from the University of North Texas in 1999 he spent that summer backpacking throughout Western Europe. The exposure to new customs, cultures and languages opened up a whole new world and appreciation for all things foreign. Since that time he's traveled 5 of the 7 continents and had his passport stamped in over 50 countries.
Social Share
17 Comments