Put Me In, Coach.

The number one rule that was established when we decided that we’d document our travels on this here blog: If ‘it’ ever begins to feel like ‘work’, we abort mission. Or, less dramatically stated, put things on pause until shooting the camera or pushing the pen once again feels exciting.

I have not written a post in more than two months. Not because it began to feel like work. Somehow I wish that’d been the case. Actually, within those same two months I’d began three posts which have just been sitting in the on deck circle, collecting dirt. And the further behind me they became in date, the less and less interested I became in closing them out. 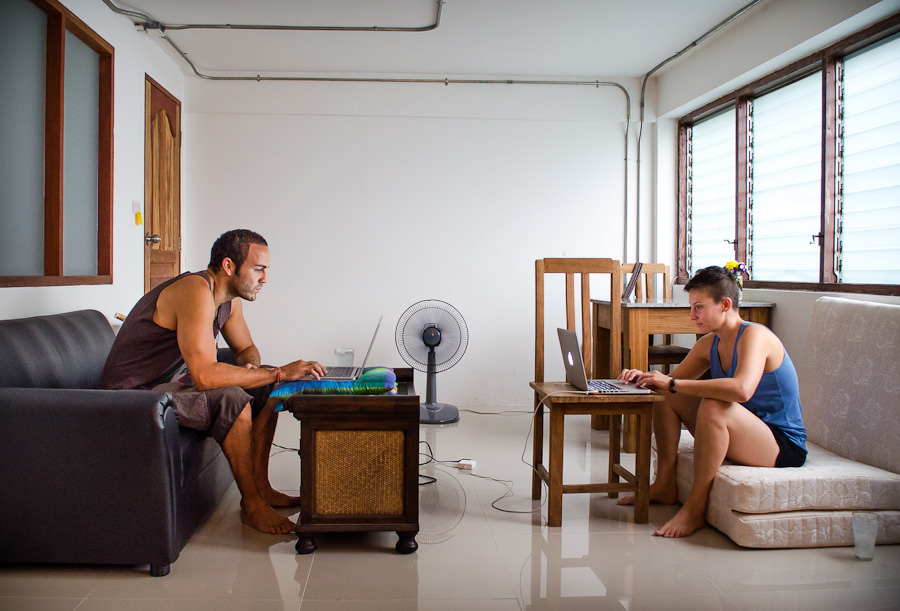 The blatant truth is, I just hadn’t been feeling creatively worthy. You see, we belong to a decent size network of digital nomads. Ashlie and I have virtually ‘friended’ some of the internet’s finest travel bloggers. A collection of vagabonds from around the world that do very similar things to what we do – in terms of traveling for months and months at a time and blogging about it. Some (most) in an attempt to monetize their website. Consequently resulting in some pretty stellar ‘work’.

It’s human nature to compare ourselves to others. So, naturally, that’s exactly what I began doing. Not only comparing myself to the Big Boys out in the Blogosphere, but to Ashlie as well. I love the way she writes, the philosophies she subscribes to. When she shares with me the first line or two of a post she’s working on, I’m in awe. Should I even be writing for the blog anyways? When we first started TBO there was a loose assumption that I was the writer and she the photographer. It was unofficial, but I think we both would have agreed I felt more confident writing and her shooting.

Somehow, somewhere along the way, that got blurry for me. Not Ashlies’ confidence behind the camera, but my own behind the pen. The longer I waited between creative writing sessions, the less enthusiastic I became when it was time for my brain to consider being creative. In short, I became creatively constipated.

In the interim Ashlie churns out a few, of what is becoming tradition, outstandingly written posts. Couple that with our blogging community’s continued growth, plus the work within their sites seemingly being so much better than what I was capable of, and you have yourself a gun-shy ballplayer reluctant to get back out on the court. Someone get the tiny violins out, please.

Then, out of nowhere (actually out of somewhere but I don’t wish to expose my ridiculously competitive nature) something snapped. Minutes before we left our apartment on our way to the airport for a blistering weekend in Bangkok, I decided I was going to begin a black and white, street photography project during our 5 days there. And just like that, I was back in the game. 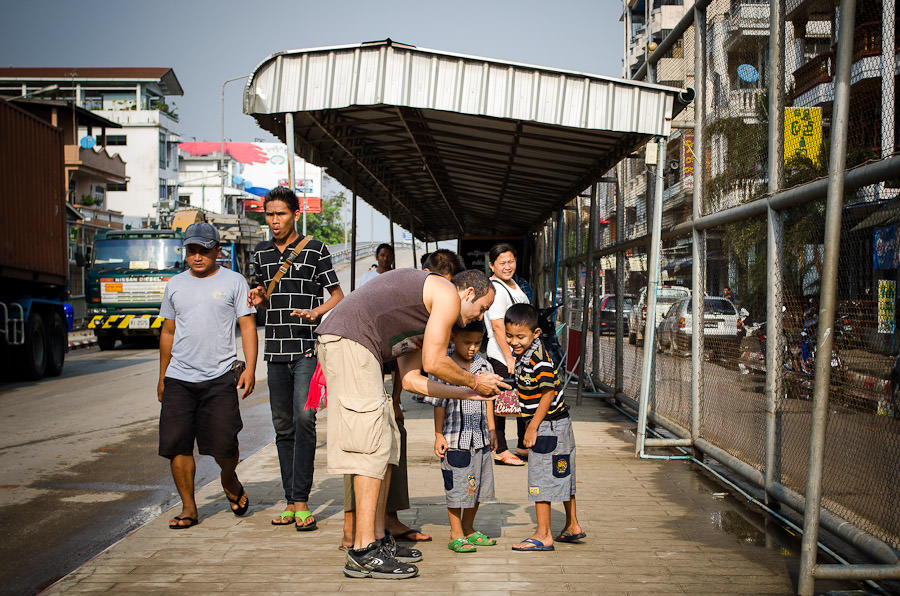 Traveling the world is my passion. But, the travel in traveling the world isn’t necessarily the enlightening part of it all. 24 hours of air and airports to get from Sydney to London, 20 hours on a bus up the coast of Brazil, 9 hours in a sardine can of a minibus with no suspension, blaring Cambodian karaoke. These are not the reasons anyone trades in the conventional life for a life following their passion.

The reason, for me, has been people. The humanity in people. And the connections created with those people to narrow down even more. The short, subtle connection made between two strangers. Sometimes powerful enough to convince you that, however unlikely, you’ve met somewhere before. The extra second of eye contact held between two strangers from opposite sides of the world, acknowledging that yes, we are different, and yes, we are also the same. 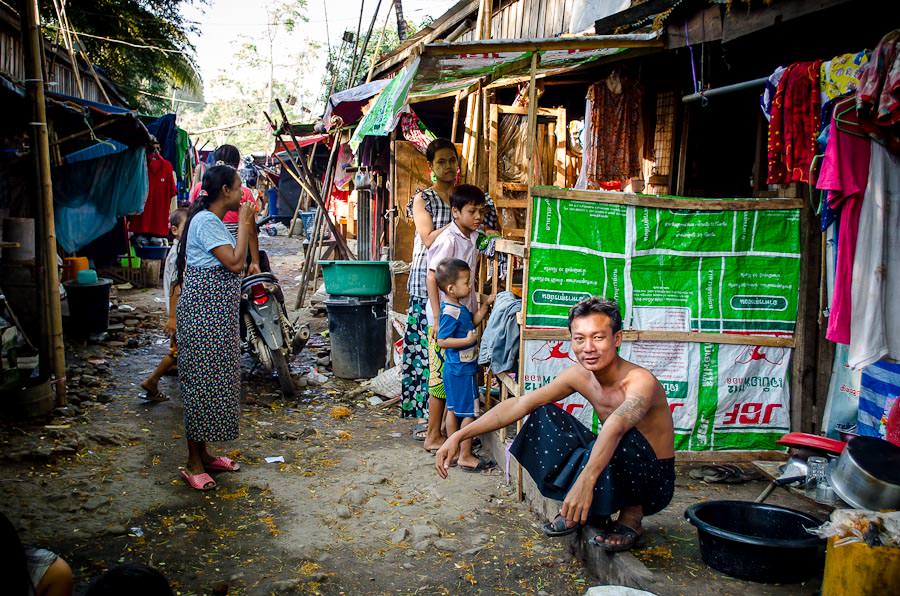 Upon returning from Bangkok, while the creativity was still fresh and flowing, I recognized that my hunger for these types of encounters was worthy of more than just a single post on our website. It defined so much of why I travel. Maybe I could create a tab on our site for this little side project? Heck, since I’m back in the game, why not swing for the fences and build my own damn website dedicated to those aforementioned encounters?

So, that’s exactly what happened. I’ve spent the last three weeks working feverishly, creating content and making myself familiar with the new set up – all in hopes to have the new site up and running before we leave for Cambodia. And, though she’s sitting right here next to me, a special thanks to you, Ash. I couldn’t have actualized this little, last-minute, side-project-turned-website, so quickly and confidently had it not been for your support and encouragement.

While I’m at it, I’d like to give a special SE Asian shout out to our Jedi-Tech-Guru, Sammy Munoz. His continued support on both sites has been monumental. Ashlie received a ‘Fatal Error’ message earlier in the week here on TBO and thought she crashed the whole thing. Almost in tears, I confidently patted her on the back assuring her ‘Sam the Man’ would save the day. Equally as important to the TBO train has been the expertise and generosity of the most well-read friend that I have, Chris Ivey. The baseball lingo in this post is for you, slugger.

Wait, how the hell did this thing go from me feeling out of my league in the blog world, to me having a new site, to me then giving thanks like I just won some sort of award?

I’m thrilled and honored to have you check it out. 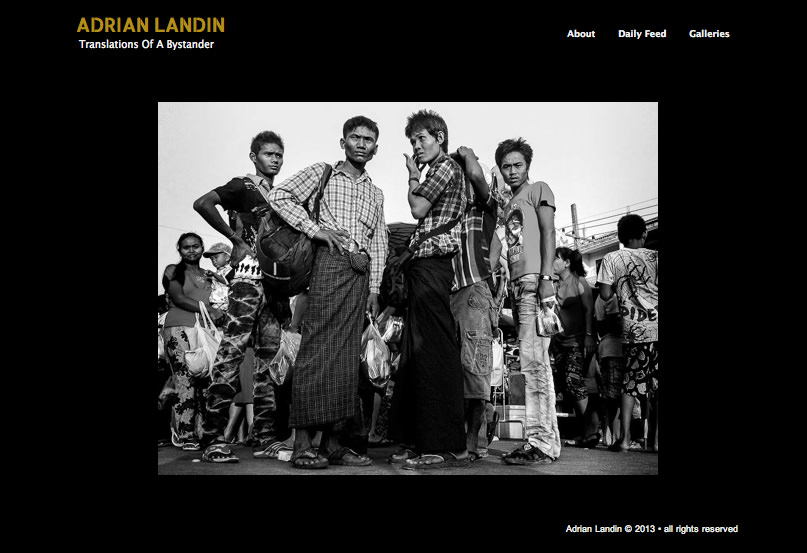 About the Author
Adrian was born and raised in Dallas, Texas. After graduating from the University of North Texas in 1999 he spent that summer backpacking throughout Western Europe. The exposure to new customs, cultures and languages opened up a whole new world and appreciation for all things foreign. Since that time he's traveled 5 of the 7 continents and had his passport stamped in over 50 countries.
Social Share
16 Comments