The Long, Hard Road To Such Great Heights

In contrast to the surge of energy felt once the destination overlooking the clouds is reached, there is something quite vulnerable about standing on top of an active, living and breathing, volcano. Because however unlikely, the truth of the matter is this damn thing could blow at any given moment. My only other face-to-face experience with volcanoes was back in 2008: one in Leon, Nicaragua and the other in Antigua, Guatemala – both experiences leaving their long lasting impression. ‘Volcano boarding’ down the 2,400 ft. Cerro Negro in Nicaragua left my kneecap packed with gravel, my mouth filled with rubble and the backside of my right leg raw with road rash. While hiking alongside the endless amounts of melting molten lava flowing out from Volcan de Pacaya in Guatemala, all but a dozen or so hairs were singed from the back of, what were, my furry ankles. Although neither daring adventure for the feint-hearted, both are memories that I clinch onto tightly. 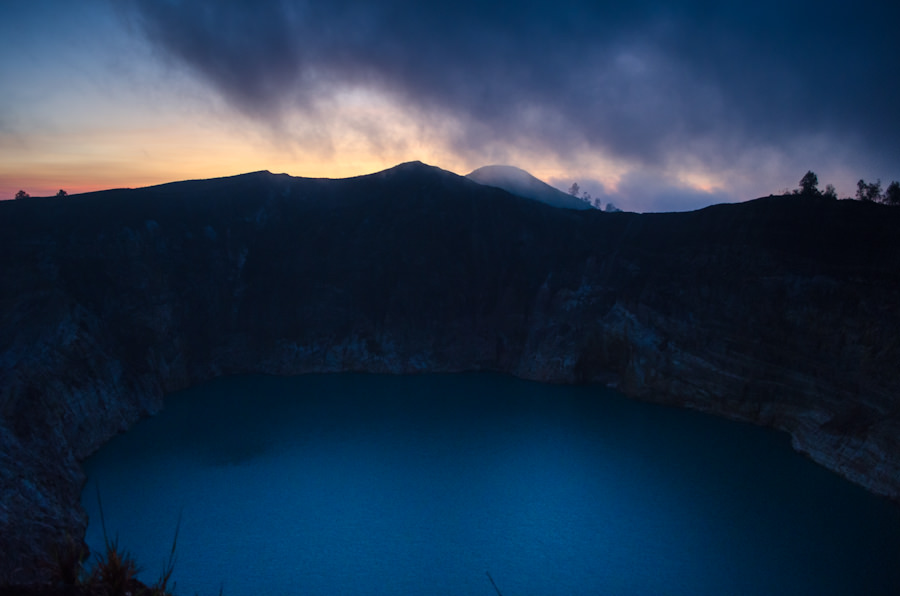 Indonesia has more volcanoes than any other country in the world, over 125 of them are still active. Often the panoramic views here can be dominated by a volcano’s massive peak bulging through a thin layer of clouded sky.

We’d heard from  travelers that the most spectacular views at each of the three volcanoes (Kelimutu in Flores, Bromo in Java, Ijen in Java) on our list come at sunrise. And even though that meant wake-up calls of 1, 3, and 3:30 a.m., we had traveled way too far to not try and indulge in the best of the best – even if it meant only a few hours of shut-eye. 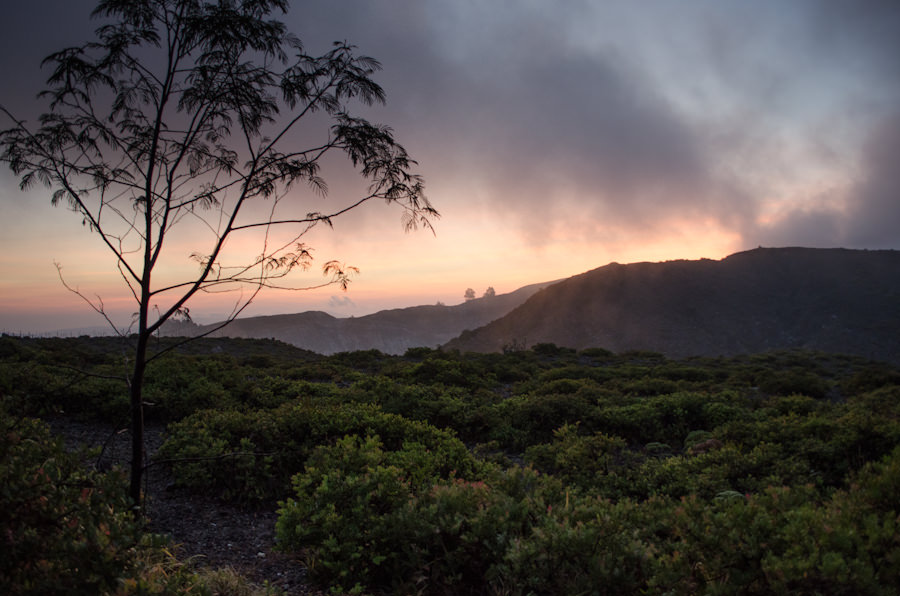 Our vote would definitely be to see these volcanoes at sunrise.

There were certainly challenges, and some risk, that came along with the reward of planting our dusty, tired feet atop each of those tectonic moving machines. The hikes were not necessarily easy; at times the terrain was unbelievably rocky, slippery and steep. Starting so early in the morning also meant we’d begin each climb in pitch-black conditions. In addition, we were given a quick education on just how cold it can get in an otherwise tropical part of the planet (during one of the hikes I wore 8 of the 12 t-shirts I brought with me, peeling each one off once the hike intensified and my body heat began to rise). Our flashlight a must, as well as surgical masks and/or one of the eight shirts tied tightly around my nose and mouth – in an attempt to safeguard myself from the waves of dust and volcanic ash, along with the potent sulfuric air constantly piercing through the nose and throat. 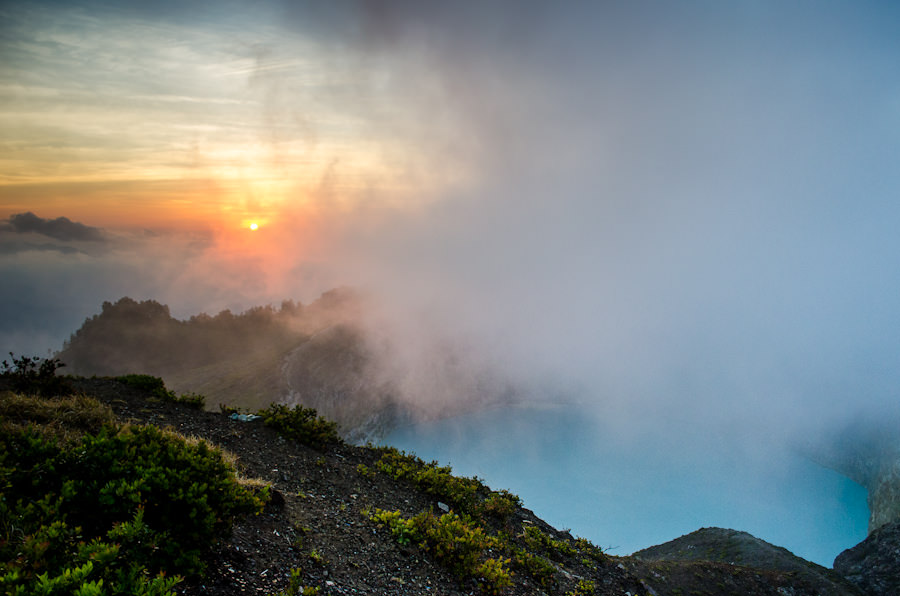 There was a half-hour’s worth of climb down to the eye of Ijen where the trek became nothing short of dangerous. But before heading down, the nine of us took a vote to see who felt comfortable enough making the risky detour, so that a bird’s eye view of the blue lava spewing from Ijen’s belly was attainable. Far from a unanimous decision, the vote was that while there certainly was risk involved, we would all stick together and exercise extreme caution. And although that’s ultimately what happened, admittedly, we had to move much more quickly than a ‘safe’ speed if we were to make it back up from where we were, and then to our ultimate destination, to the top of Ijen, for sunrise. The terrain steep, the volcanic craters drastically uneven and sharp, any light still nonexistent – down we go. 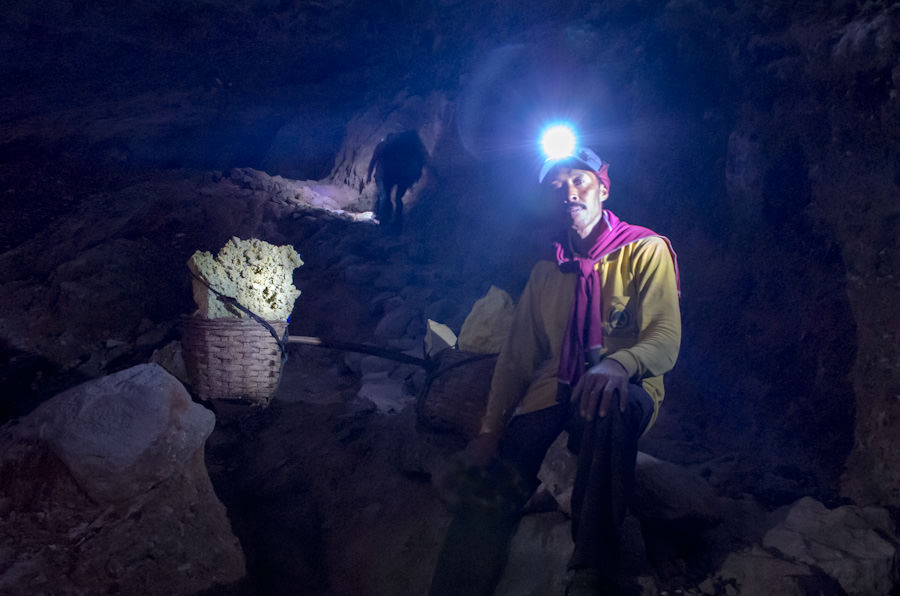 One of the many sulfur miners working down and around the belly of Ijen. The air was foul and the working conditions shockingly dangerous.

Ashlie and I only had one flashlight between the two of us and it was here where our frustration got the best of us and we snidely snapped back and forth at one another. The fear and risk of where we were and what we were doing reared its head. But, there’d be no time for petty bickering at this point (post climb, a new rule was put into place, ‘no fighting on the edge of volcanoes’), we literally needed each other’s hand, strength and support to vault ourselves up and help secure the giant steps down and around the aforementioned uneven rock. Truth be told, the blue lava shooting 12 inches out from the mouth of Ijen, in the dark of the night, was just ‘ok’, not even close to being worth what we’d all put ourselves through to get down there though. 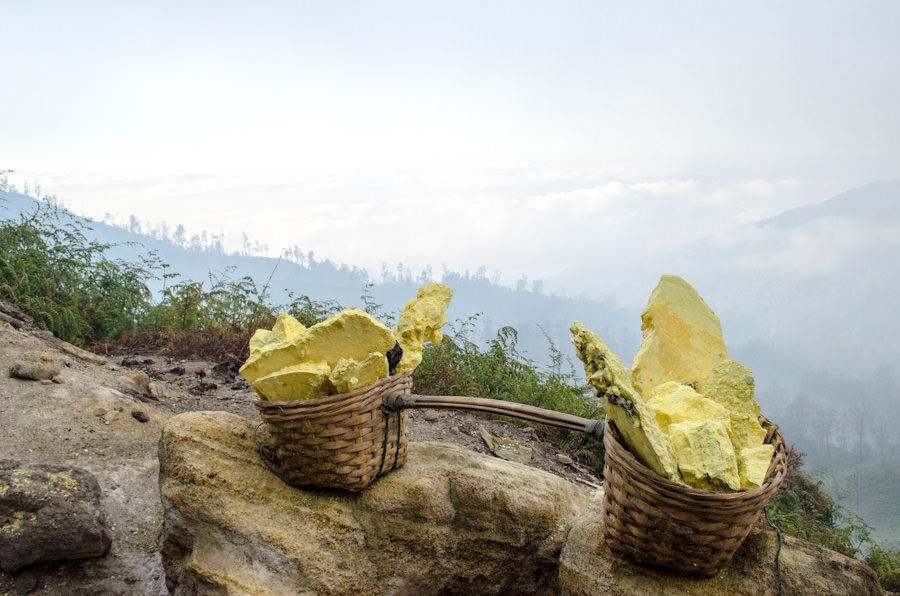 Once the sulfur is carried up from the rocky belly of Ijen, the miners still have to haul it a few miles down from the volcano where they sell it by the kilo. This load here would be worth about $6 bucks.

Once we all made the climb up and back to the main trail, everyone began to trek at their own pace. We were all somewhat in a race against time to get to the peak for sunrise. However, Ashlie and I held back as we were mesmerized by the dozens of middle-aged Indonesian laborers hauling kilos and kilos worth of sulfur balanced in baskets on their shoulders – up and down this ‘dangerous’ terrain – in the dark, while wearing flip-flops. Slave-caliber work, gassy, foul smelling conditions, carrying 120 lbs. worth of sulfur up, down and around THAT terrain, for what we learned to be the equivalent of $6.00 per trip. 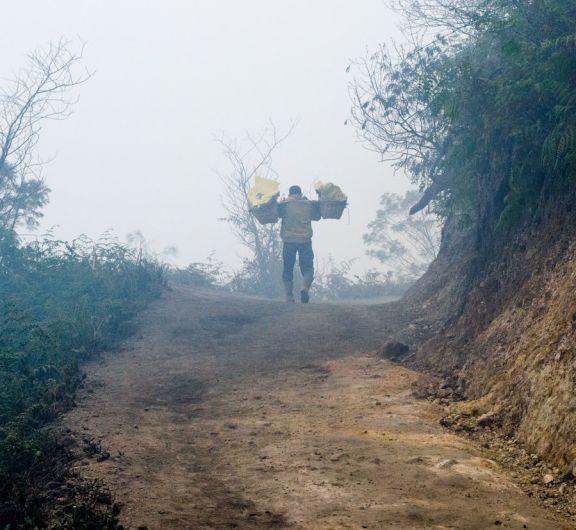 Their baskets usually combine to weigh between 120-140 lbs. One of the laborers stopped to show us the lump coming up out of his shoulder blade from the years of hard work. It was the size of a softball.

Unbelievable. Talk about putting a few things in perspective. But, as each man would pass, every single one of them looked us square in the eye, smiled and graciously said, “Hello” or “Good morning”. It should be noted, I will forever hold the people of Indonesia close to my heart because of this sort of genuine hospitality and friendliness. Hands down, the most pleasant surprise from the two months of being there. 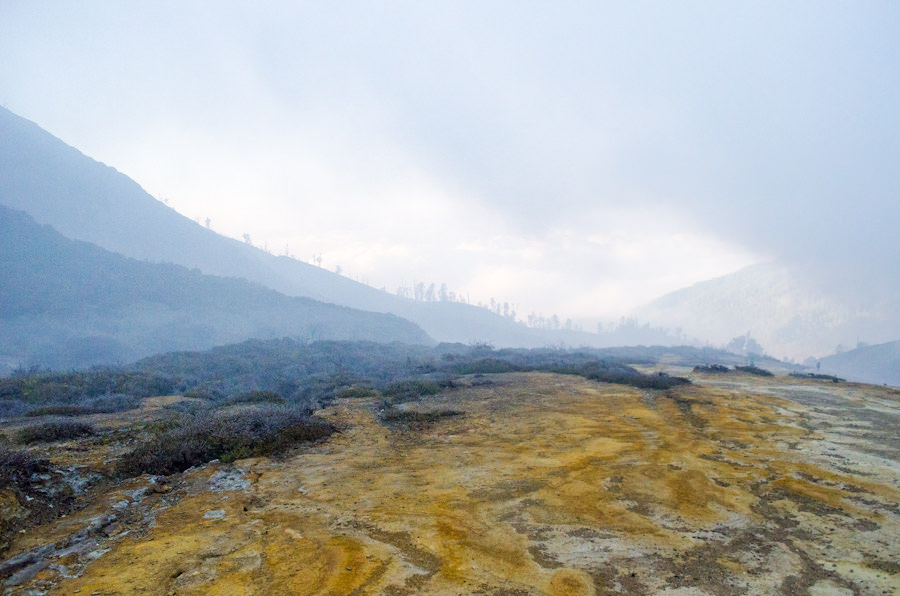 Admittedly there were times when the sulfur was strong enough to trigger my gag reflex. Even with a mask or shirt tied around my face.

Back on track we came to a very narrow point that was pure brush, the height and thickness of the limbs and leaves made it difficult to follow the trail. Whoever was walking behind was being slapped in the face by the sticks and branches snapping back after being pushed through by the other (I was in front on the way there, but got branch-slapped on the way back). Slowly but surely the brush began to thin out, it was obvious that we were almost there. 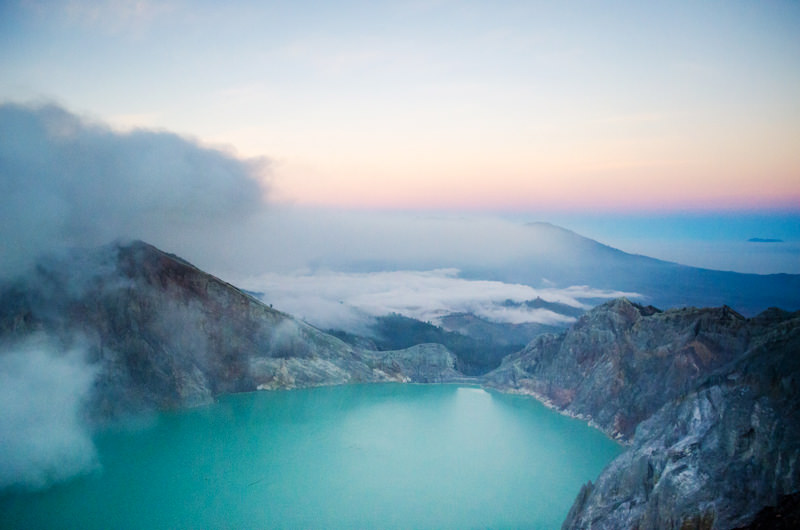 I could hear the voices and the camera clicks of the other seven. My feet became lighter, my body no longer felt fatigued. And after breaking through those last set of limbs and stepping up onto the lip of Mount Ijen, I looked across what seemed to be half of all the sky, took a long, deep breath of the freshest air I’d had in days, bit my bottom lip and said to myself, ‘it all makes perfect sense now’. The hours of bouncing around that shock-less SUV whose driver drove like a bat out of hell, the 1 a.m. knock at the door wake-up call, the God-awful excuse of a breakfast we were supposed to eat before this hike, the 8 layers of t-shirts, the rotten sulfuric smell, the volcanic dust in my eyes, mouth and throat, the smart-ass exchange of words Ashlie and I had. Simply put, it was all worth it. 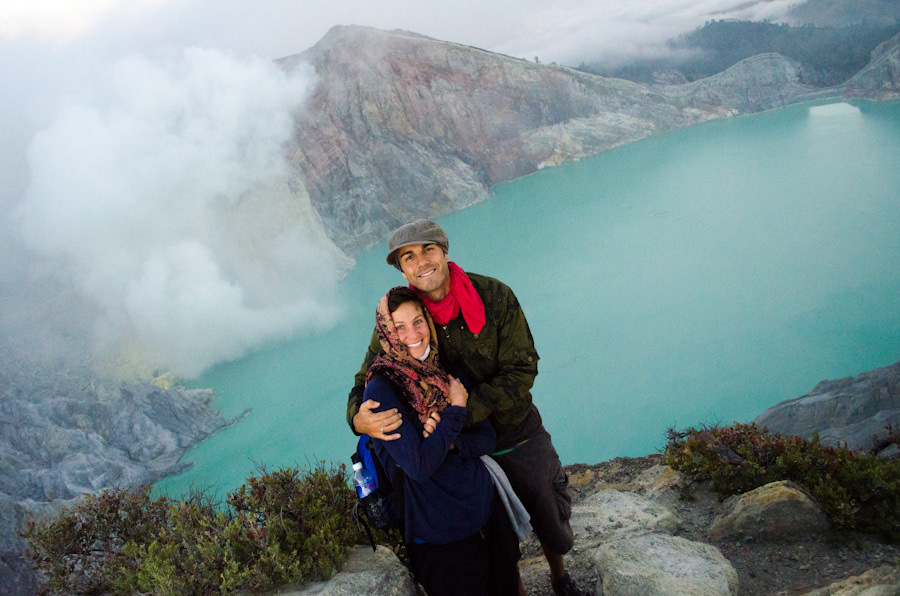 To finally be 9,000 ft. up in the sky, standing on the edge of one of the most powerful forces of nature, eye-to-eye with the clouds. To see the first slice of the sun beginning to creep up on the horizon, beaming its rays off those same clouds, which so brilliantly painted the canvas of sky with such a beautiful spectrum of neon colors. There’ve been a handful of times throughout my travels where I truly felt that I was standing in the midst of magic, where something unexplainable tapped into my soul. This was one of those moments. Over the years, many travelers had been exactly where we were, there were dozens more that were just waking up and preparing for the same hike, but in that moment, none of that mattered – this view and this volcano belonged to us. The sheer beauty of what was in front of me was pure, untouched by the outside world. All vulnerability vanished and a sense of freedom and life began pumping feverishly through my veins. 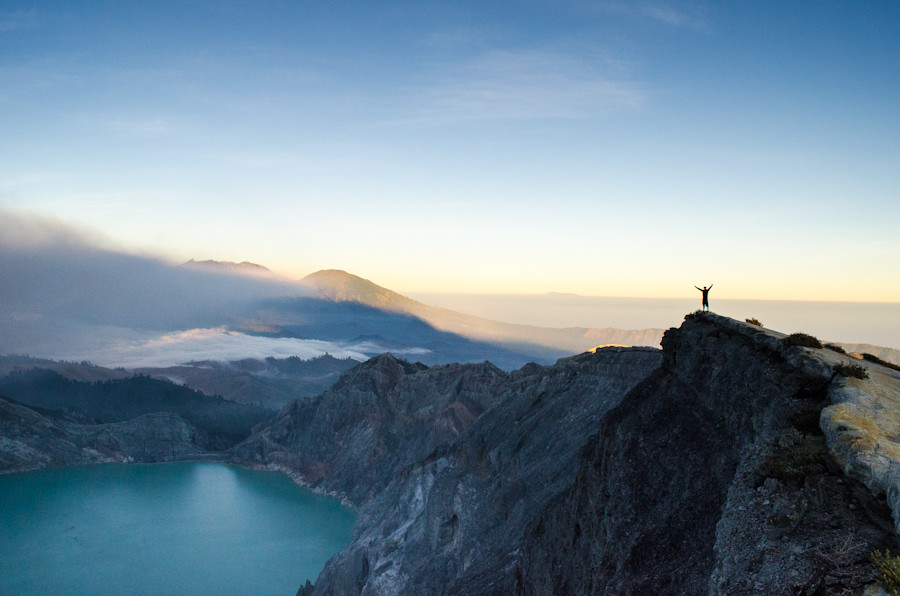 About the Author
Adrian was born and raised in Dallas, Texas. After graduating from the University of North Texas in 1999 he spent that summer backpacking throughout Western Europe. The exposure to new customs, cultures and languages opened up a whole new world and appreciation for all things foreign. Since that time he's traveled 5 of the 7 continents and had his passport stamped in over 50 countries.
Social Share
12 Comments