We’d been in Nepal’s bustling capital city less than 24 hours. In what has become routine upon arriving in a new city, I was up around sunrise ready to wander and explore the streets of a place that’s been a dream of mine for over a decade.

Like every other SE Asian country’s capital, Kathmandu’s streets are purely chaotic. The roads are awful – resembling heavily bombed strips of concrete, all the streets foundation is fractured and surrounded by rubbled potholes. Clouds of dust and dirt have a noticeably higher number of locals wearing surgical masks. Sickly thin dogs roam the mucky streets while maniac-mounted motorbikes dart through the most unlikely of creases. 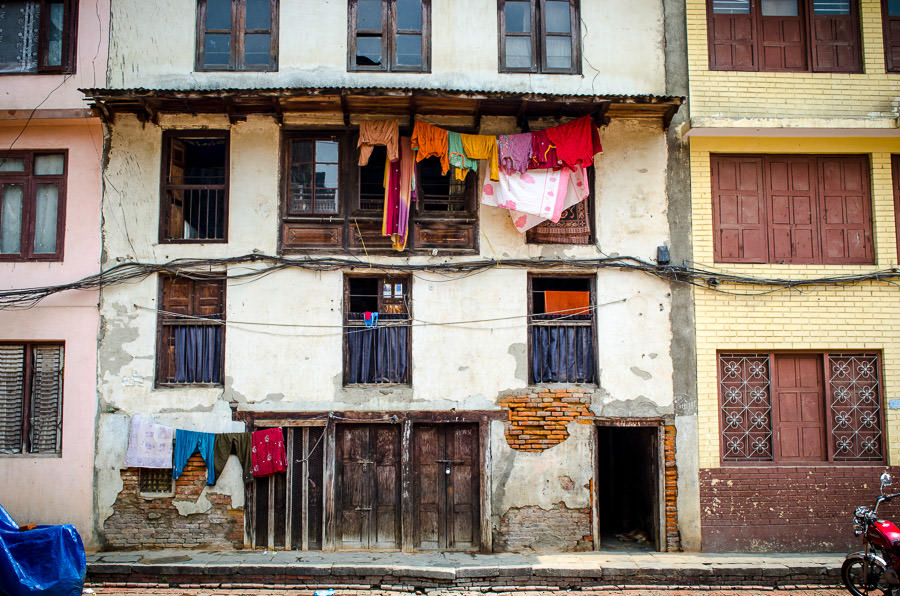 After a short morning’s stroll through the chaos, we hopped on a suspect-looking rickshaw and bounced through the cities dark, slender alleyways. For as fragile and run down as these city walls appear to be, never have I seen such a beautiful array of grit, texture and color. Oh, man, the colors. Once out from the back alley’s mazed shadows, the sun began to burn through what had been a welcomed shield of morning cloud. Back on foot we broke into our unspoken, yet consistent, formation. One of us always takes the lead while the other trails a half block or so behind. For as much as we both are shooting nowadays, separating ourselves with that distance dims the glow and attention of ‘two pale-skinned tourists walking side by side’. That space additionally lessens the likelihood of one of our backsides or faces showing up in the other’s photo (which still happens anyway). 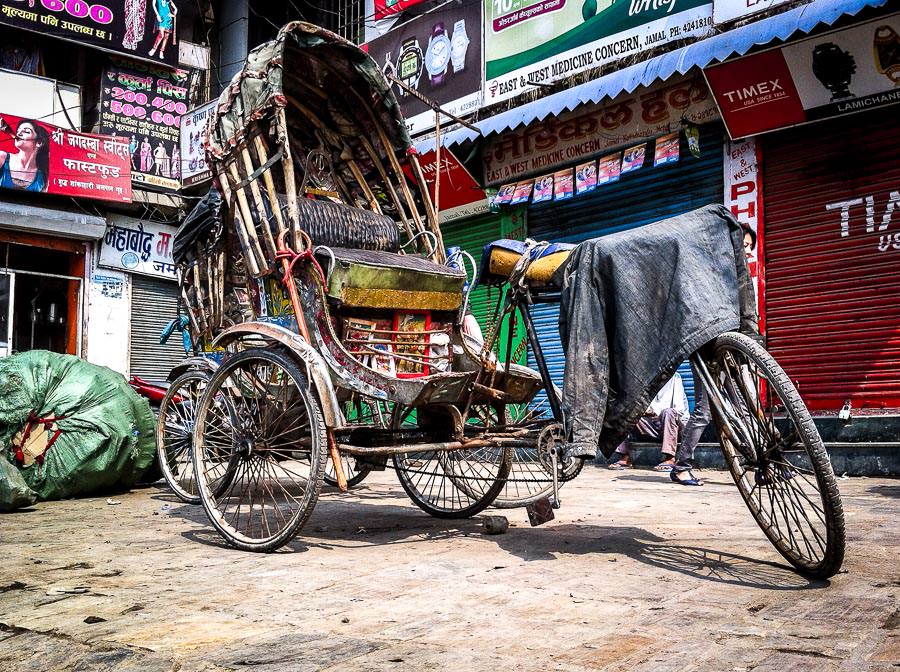 In the lead position with no particular direction in mind, I found myself in the middle of a heavily populated square, snaking through the crowd of street vendors until I got to a corner where I could watch this tiny, squared piece of Kathmandu in motion.

It’s as noisy and fast-paced as Hanoi but the sights (blissfully colorful outfits worn by aging locals worshipping at shoebox-sized temples), the smells (thick waves of sage and sewage circulating through the air) and the sounds (chiming bells and whispering prayers of devout Hindis) were all new to me – and they were exactly the reason why I was where I was. 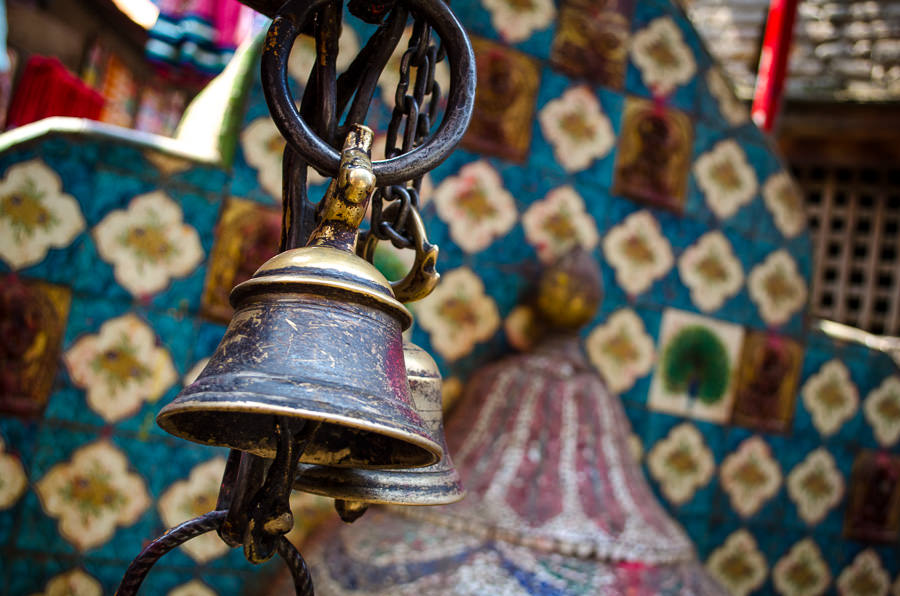 Excuse me, sir. Where are you from?

If there is one thing this city is not short on, it’s people hitting you up for any and everything on the street. Milk money for their starving baby, taxi rides to textile shops, paintings, tiger balm, hashish. You name it.

America, I sharply replied without looking him in the eye.

I was too “in” on what my senses were experiencing to appease his attempt at conversation. On the contrary, I’m usually playfully engaging with people on the street. One of my favorite things to do is befriend a local and buy them a coffee or beer after exchanging small talk.

Even after ignoring my ignoring him, Raj still stood there. Asking if I’d seen this famous temple or that famous stupa.

Sir, I really don’t want anything from you. I’m a shoe shiner and right now I have no customer and like to practice my English for you. Oh, have you seen the white temple yet?

I’d heard about this white temple but had no idea where it was.

If you like I’m happy to show you the white temple and then I can show you pigeon temple. People who go become very happy. Both temples are a two-minute walk from here and very nice. I promise you will feel happy. 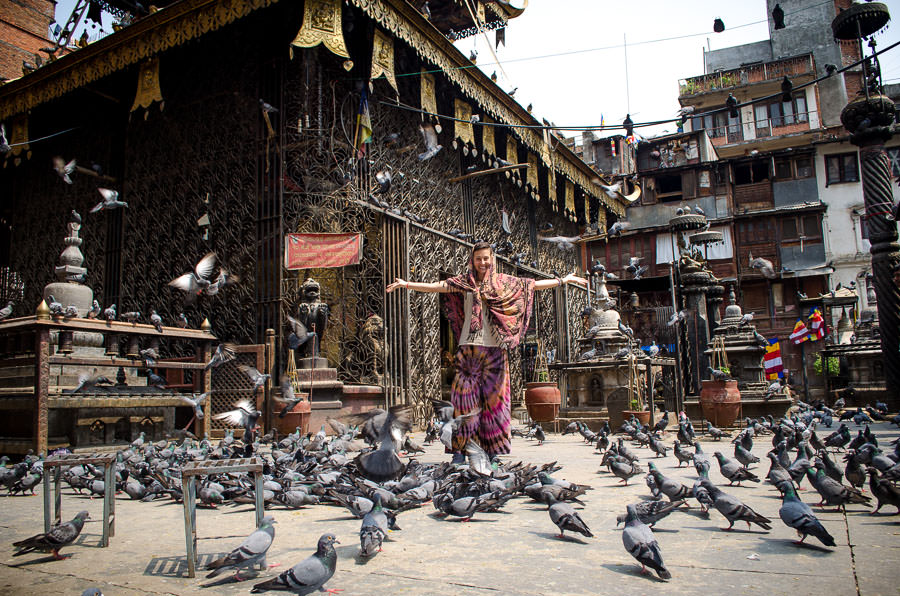 Although there was absolutely nothing malicious about this kid, he was working me. He wants nothing but will show us around and in return hopefully we’ll feel obligated to give him a dollar or two. I knew this and I let him know that I knew this. But, he had me – I was now out of that square and endeared by this short, harmlessly sweet-natured Indian lad.

Twenty-two years old, Raj and his family immigrated to Kathmandu from India two years ago to try and find a better way. And although things would later get out of hand, I have no doubt in my mind that Raj is a good kid – a good kid wrapped up in a not so good life.

The three of us spent the next six hours going from temple to temple, sight-to-sight and street corner to street corner. Raj was informative, friendly and particularly protective, making sure we all stayed close together while grabbing Ashlie’s arm to guide her through the thickly trafficked streets. 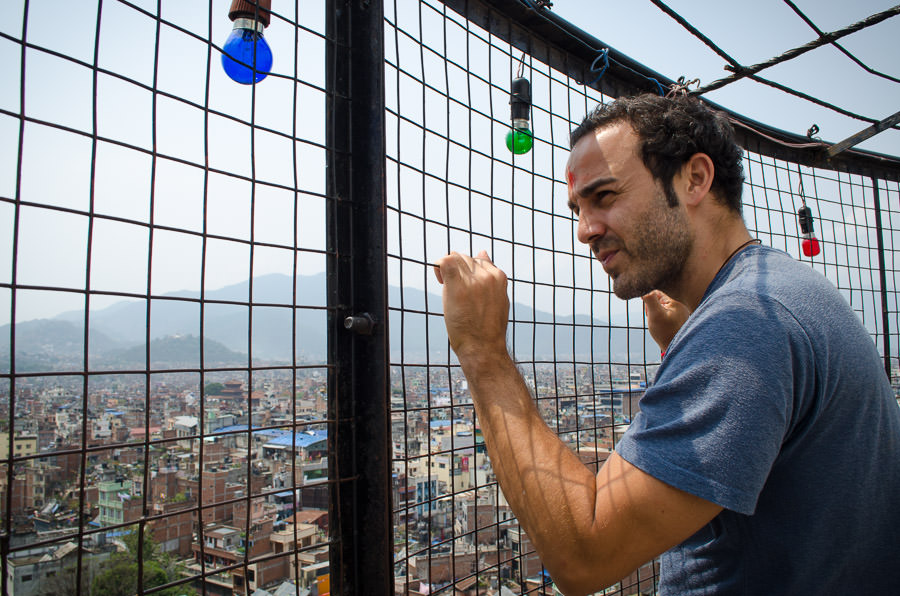 While in search of a spot for us to sit down, relax and have a coffee, Raj finally made his move.

If I can ask you a question, Adrian, sir?

It is possible that you help me and my family with buying a bag of rice and bottle of oil to cook and eat?

Not surprised, yet still a little irked, I was quick to remind him of our initial conversation in the square earlier that morning.

I don’t want your money. Really. I just want rice and oil to feed family.

You can put the tip money I give you towards rice and oil, can’t you?

Don’t worry, sir. It’s ok and I’m sorry for asking it. I really don’t want any money, he insisted.

Knowing there is no way in hell I’d not compensate him for his efforts on the day, we all carried on the search for coffee.

(For the record, nearly half of this country’s population lives off a wage of one dollar a day. Average yearly income here in Nepal is less than 200 dollars(!). 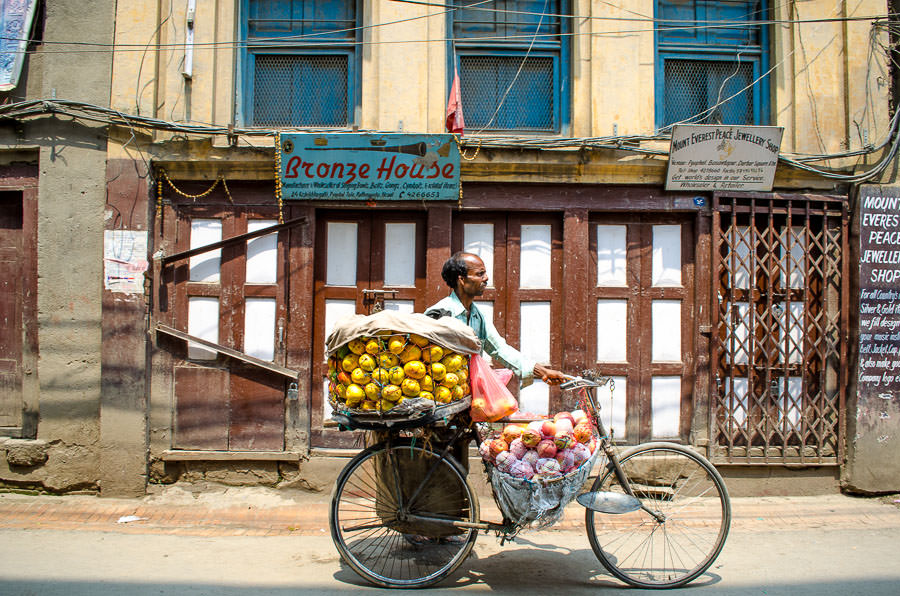 After photographing a particular street corner I turned around to find Raj a ways back arguing with a light-skinned Nepalese. I recognized this guy. I remembered his greasy, long hair and faded yellow shirt from a stop we’d made earlier in the day.

After a visualized confirmation with where Ashlie was, I walked towards, but not up to, Raj. His face was stern. He then walked straight past me and said we needed to go.

Who is that guy, I asked.

He is a Nepalese people. He is not a nice man and we need to leave this area now.

I turned around to see the yellow-shirted prick, square-shouldered, looking and walking our way. My heart rate skyrocketed and I immediately felt threatened. Although there were at least a hundred other bodies between he and I, as each head passed, I could see his beady eyes locked in our direction.

I turned my entire body towards him and he stopped. Motioning with my hand to go away, he turned his body in the other direction and hesitantly walked away.

Rejoining Ashlie and Raj, I insisted that Raj cut the shit and tell me who this man was, and why he was now following us.

He hit me everyday. Because I am Indian he want money from me everyday. We need to go because he a very dangerous…

There he is again, Ashlie nervously says. He’s following us again.

What happened next was one of the stupidest things I could’ve done. But, my body and blood became infuriated, some sort of protective instinct or mechanism took over. When he saw me charging at him, he immediately stopped his pursuit. My heart pounding out of my chest, I screamed at the top of my lungs, You! Stay the f*ck away from us! Go away! Now!

A scene had officially been made. I could feel the heat of dozens upon dozens of Nepalese eyes staring right at me.

Adrian, Adrian! I could hear Ashlie yelling my name.

With both he and I stopped in our tracks and squarely looking at one another he yells, Not you. Nothing you. Him. I follow him.

My body wouldn’t let me budge. I stood there with a snarl on my face until this thug turned around and disappeared into the crowd.

Adrian, sir,  please leave him alone, he is dangerous man, Raj says while grabbing my arm and yanking me in the other direction.

Seriously, Adrian. What the HELL are you thinking, Ashlie chimes in. 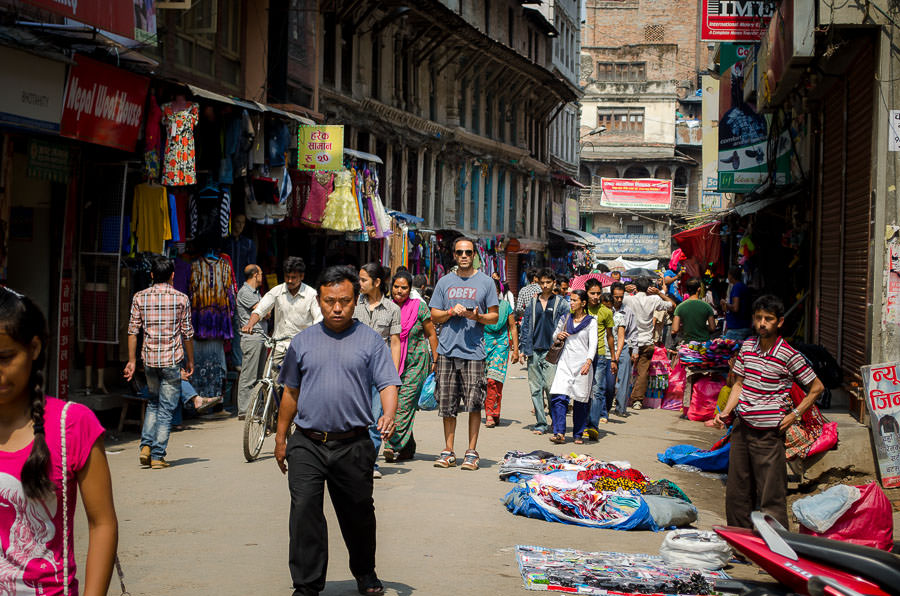 As we quickly moved through the crowded streets we got to a corner where we could all stand side by side. Assuming that amongst the waves of locals there’d be no way this guy could’ve kept up, shockingly, I look back over the crowd and find the greasy-haired, yellow-shirted bastard coming our way.

This time we all quickly turned and hurried in the opposite direction. Raj took the lead and Ashlie and I followed him down a dark, narrow side street and up some stairs into a small café. We went straight to the back of the restaurant and sat at the last booth in the unlit, left corner (me facing the door). These streets are like a maze and with all the different ways we could’ve gone, along with just how quickly we’d moved, the only way this guy could’ve found us once again is if the two of them were in on this thing together.

After a few minutes of cool down, it was there where we finally had our coffee and our lunch. My heart and head were still racing but Raj never felt the need to turn back around and check the door, so I felt like our getaway was a success. During lunch, Raj explained the discrimination he has to deal with on a daily basis because he is an Indian working on Nepalese turf. This guy slaps Raj around enough until Raj gives him enough money to satisfy his bully appetite. Raj also explained that this man is extremely tangled up in drugs and alcohol, a recipe that I know I want no part of. 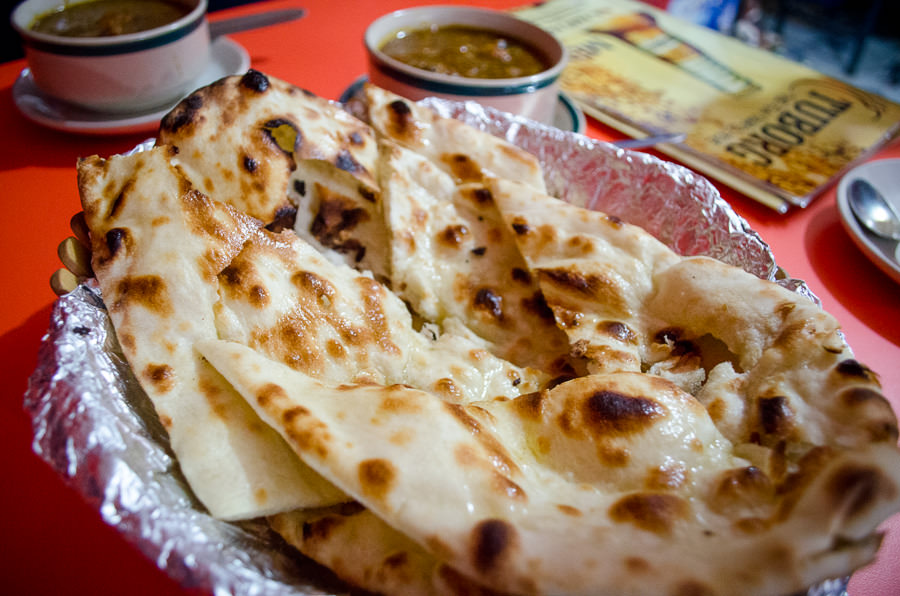 After paying for lunch I took the 500 rupiah in change ($6), rolled it up tightly and tried to put it in Raj’s hand.

Sir, please. I don’t want your money. Really. All I want was rice and oil. No money.

Raj, take this money and go buy your family some food. If I buy the food for you, I will most certainly get overcharged. Take this and go buy what you can with it. Please.

Whether it was appreciation, humility, or an act, his pitch-black eyes swelled with tears.

Thank you. Thank you so much. I invite you and Ashlie to my home for tomorrow and my mom will cook us food. We live in a tent but will you come for tea and lunch?

Somehow, someway I trusted this kid, or maybe I was just sympathetically endeared by him. Plus, it has been in situations like these, being invited to a local’s home for dinner or drink, that have materialized into some of my fondest and most treasured travel relationships.

We set the time and were to meet Raj and his family in tent-city two days later. Still conscious of the possibility that the greasy guy might be somewhere outside the café, we shook Raj’s hand good-bye and quickly headed back towards home.

Fortunately the dingy, yellow shirt was nowhere to be seen the rest of the day. But, unfortunately we had not seen the last of the dangerous Nepalese man.

About the Author
Adrian was born and raised in Dallas, Texas. After graduating from the University of North Texas in 1999 he spent that summer backpacking throughout Western Europe. The exposure to new customs, cultures and languages opened up a whole new world and appreciation for all things foreign. Since that time he's traveled 5 of the 7 continents and had his passport stamped in over 50 countries.
Social Share
14 Comments