Ayutthaya, The Venice Of The East (?) 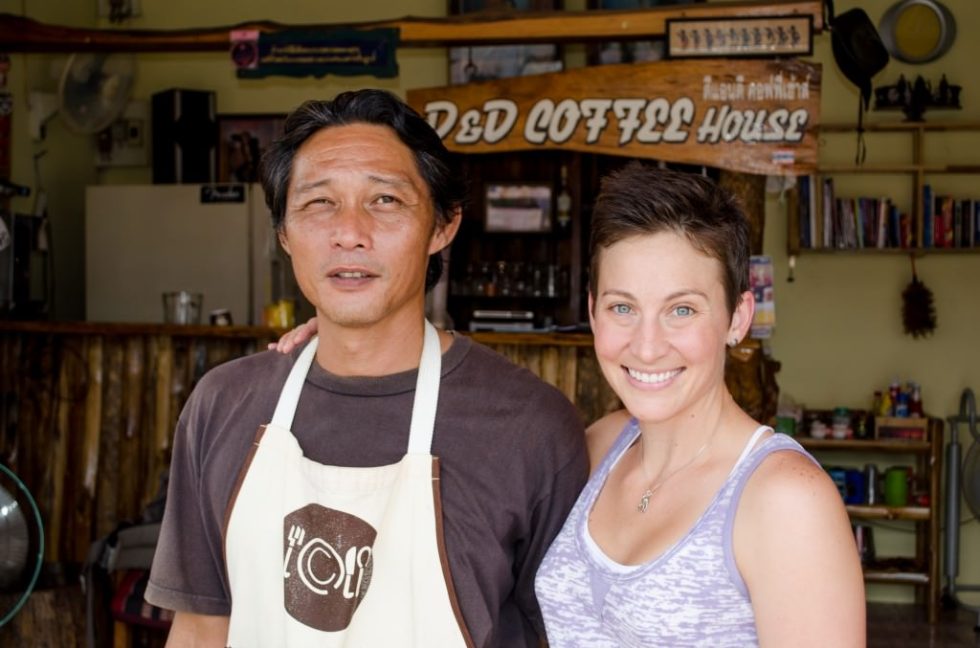 Final goodbye to the highlight of our time in Kanchanaburi, Pee Nong, the barista.

After our second little stint in Kanchanaburi, it was time to go.

Not because we’d seen everything there was to see or do everything there was to do, we actually would have enjoyed staying longer had our Thai visas permitted. Unfortunately, less than a week remained before our thirty days expired and, before we left, we had mentally penciled-in a short trip to the former capital of Thailand, Ayutthaya (pronounced Eye-you-tee-ahh).

When traveling from country to country and city to city, there are those times when you stumble upon a particular place and, for some unexplainable reason, instantly feel an overwhelming sense of peace, connection and “My oh my, I could live here”.

Ayutthaya is not one of those places.

The former capital of Thailand is heavily sprinkled with some of the oldest ruins and temples the country has to offer. The majority of which were dramatically destroyed by the hands of the Burmese hundreds of years ago. The city itself is located at the junction of two large rivers, the old city is on an island formed by a bend of those waters. Although run-down and not necessarily easy on the eye (or nose), this is a city that, because of its ancient ruins and history, is flooded by tourism. Half-day tourism. The kind that leaves locals despising the pale-skinned westerner, ready and willing to overcharge or give the incorrect amount of change back at the drop of a hat. Hundreds, if not thousands, of day-trippers ride the bus in from Bangkok everyday to investigate what some strangely refer to as the “Venice of the East”.

The excursionists then pile back on their buses and return to Bangkok. However, not before trying to bargain down every taxi, tuk-tuk driver and street vendor in town. Often arguing over what might amount to fifty cents back in their own country. The constant battle between the Johnny tourists and the locals has unquestionably left its ashy footprint on the city of Ayutthaya.

We did have a few endearing encounters with locals, but also had a few of the opposite. The sweltering heat and humidity, along with a beautiful bout of food poisoning I picked up while there (if I’m betting, it was that damn squid salad off the side of the street), made for a very mutual, ‘happy we came and saw, but happier we’re leaving’ type of experience.

With our Thai visas soon expiring, we flipped an imaginary coin and …. Indonesia here we come.

Here are 10 highlights from our time in Ayutthaya: 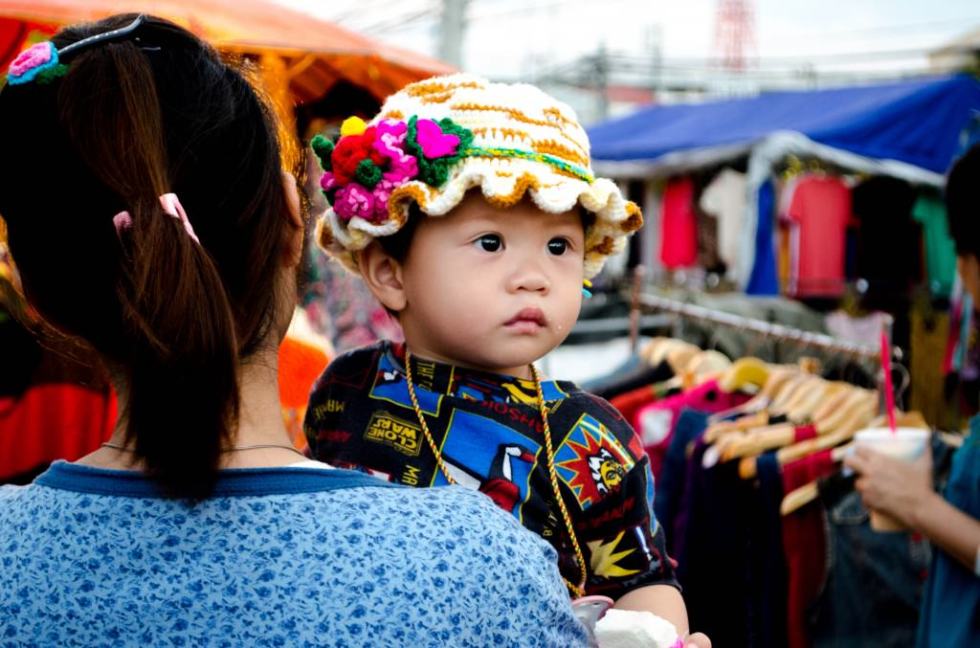 A wide-eyed toddler being paraded through the crowds of the market. 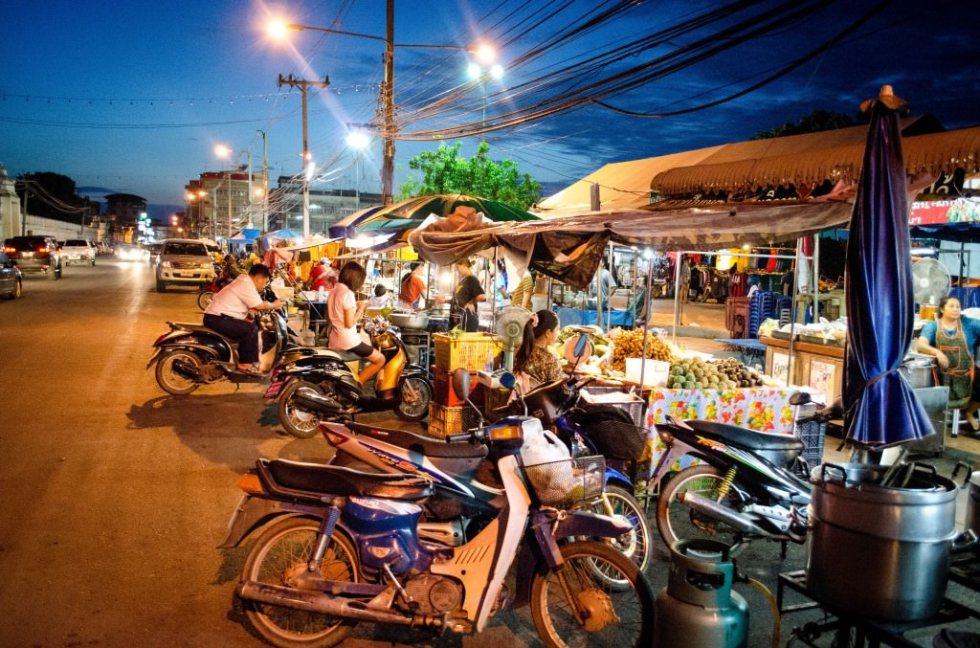 Glued to their phones, local Thais pull up to the backside
of food stalls whilst their dinner is prepared. 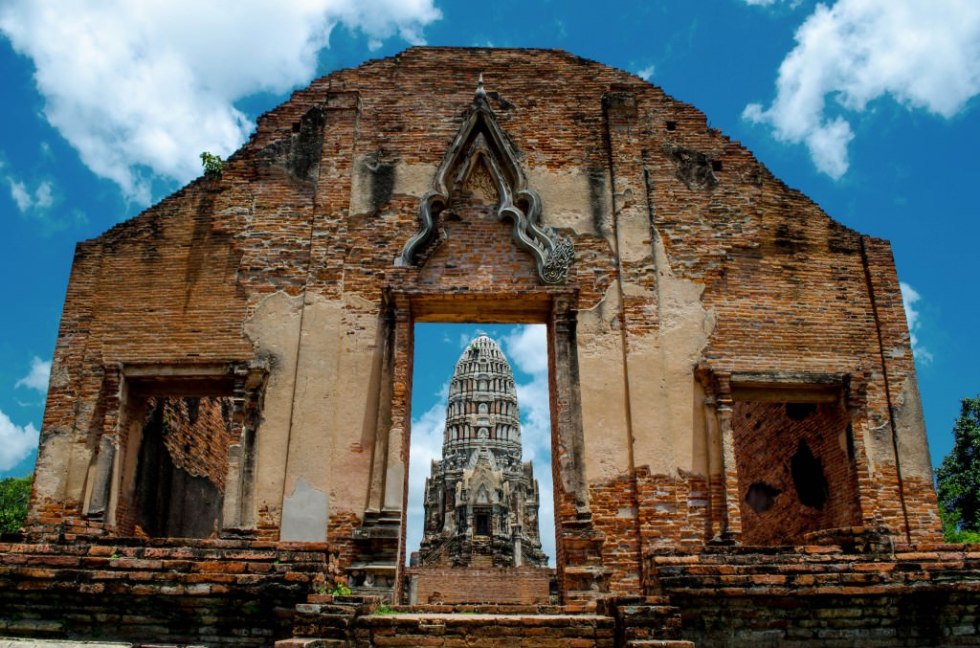 Roof & wall-less, what remains of this particular temple is still something impressive to see. 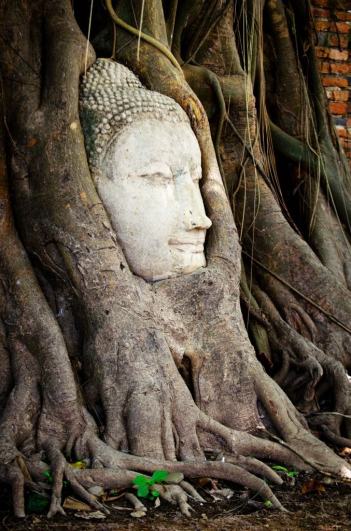 Wat Mahathat. Mother nature cocooning the stone Buddha head.
One of the most iconic images throughout Thailand, and for good reason. 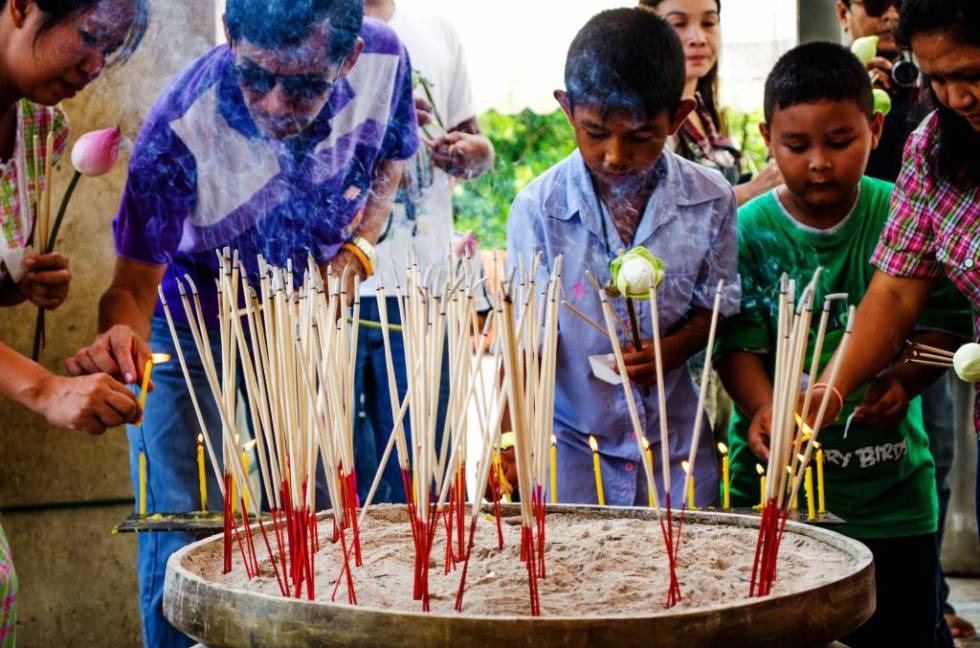 Thais at the beginning of their ritualistic entrance into a temple service.
Together, the smoke from the incense & the sounds of the chants were invigorating. 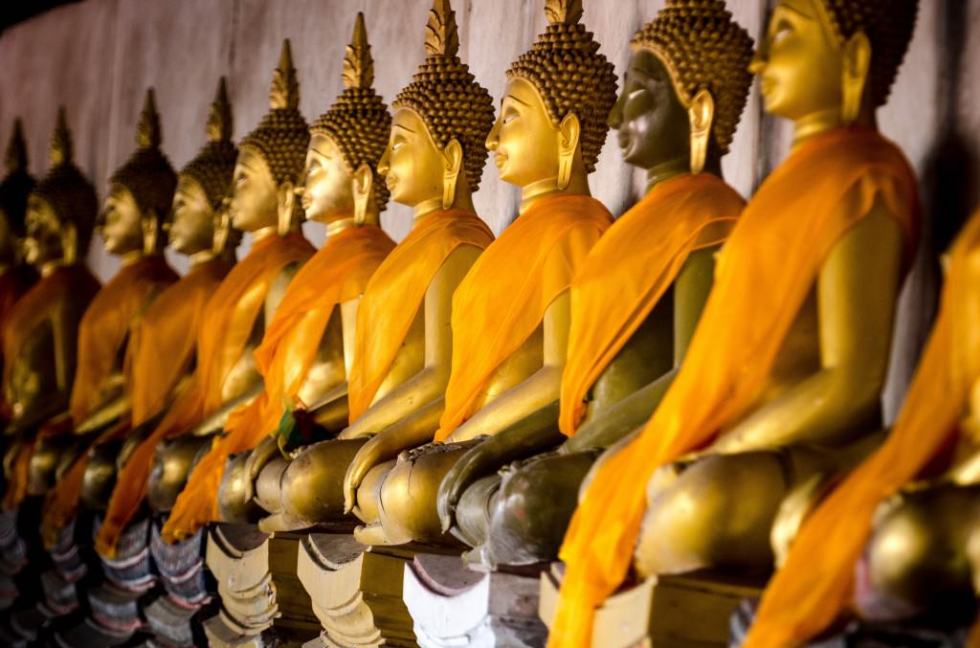 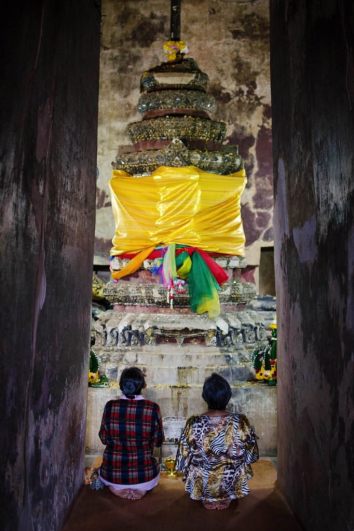 The pose of prayer, two Buddhist women deep in action.
Covert capture at the very top of a narrow and steep set of stairs. 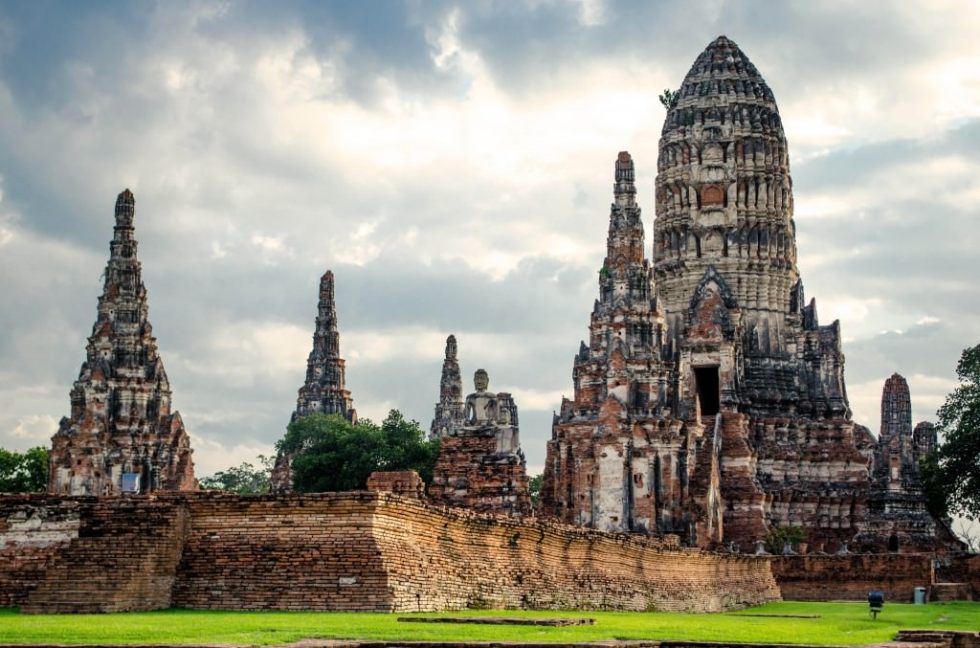 This fading masterpiece was built in celebration of the fall of the Khmer Rouge.
I would love to see what a day in the life of this temple looked like during its prime. 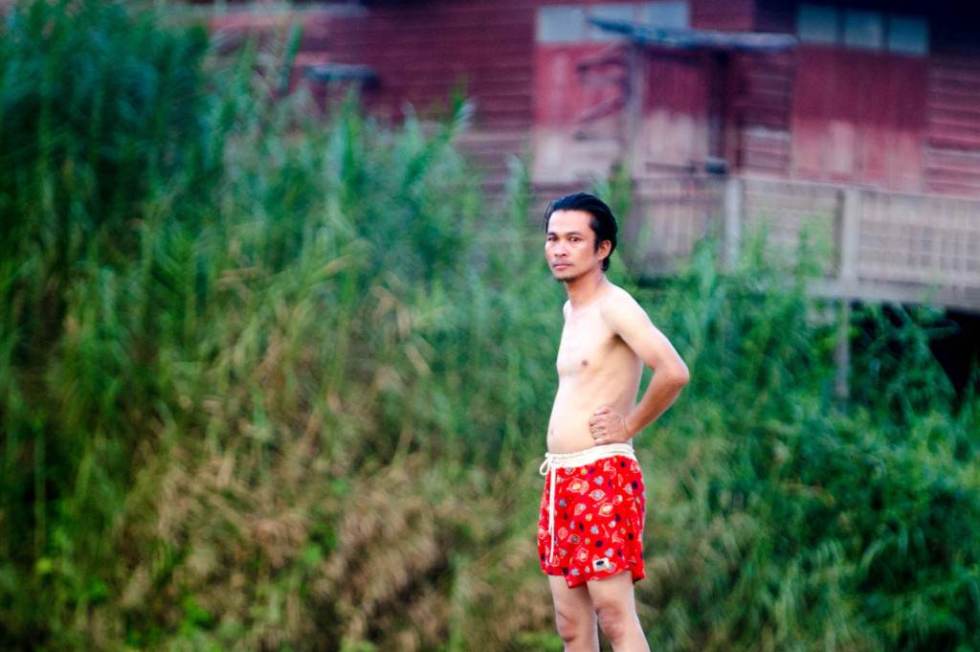 Standing on the bank, fresh from bathing himself in the river. 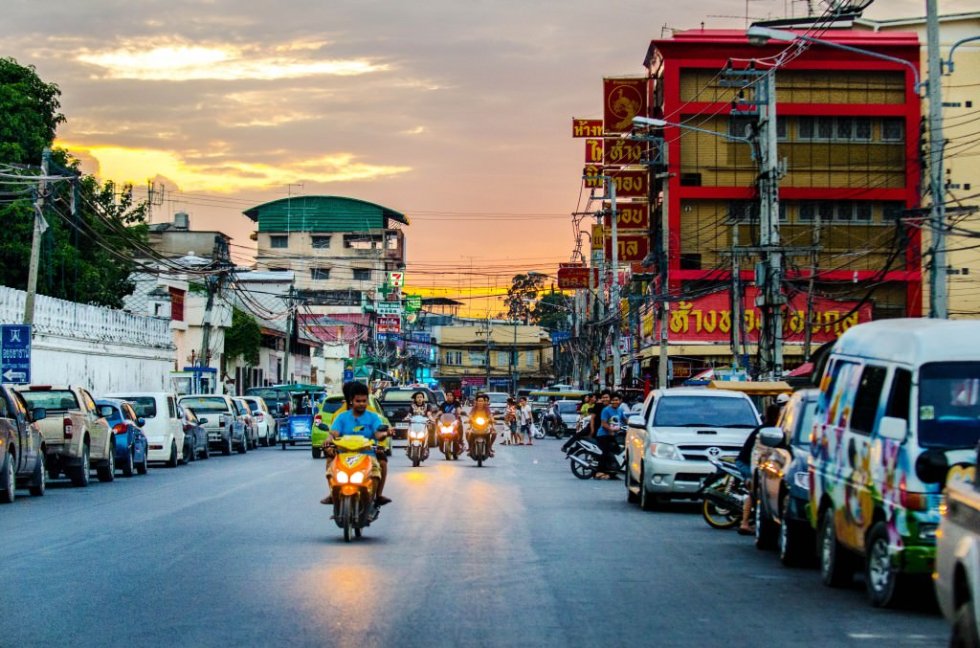 Ayutthaya streets at dusk. The sun setting for the east and rising for the west.