Provoked By Poverty And The Unavoidable Questions

If your eyes are open you will see the effects of poverty. In developing countries there is no escaping it. Perhaps in America we can insulate ourselves inside our houses and communities and remain untouched, but not in Cambodia or India or Nepal. You will deal with it whether you want to or not. It will come to you. 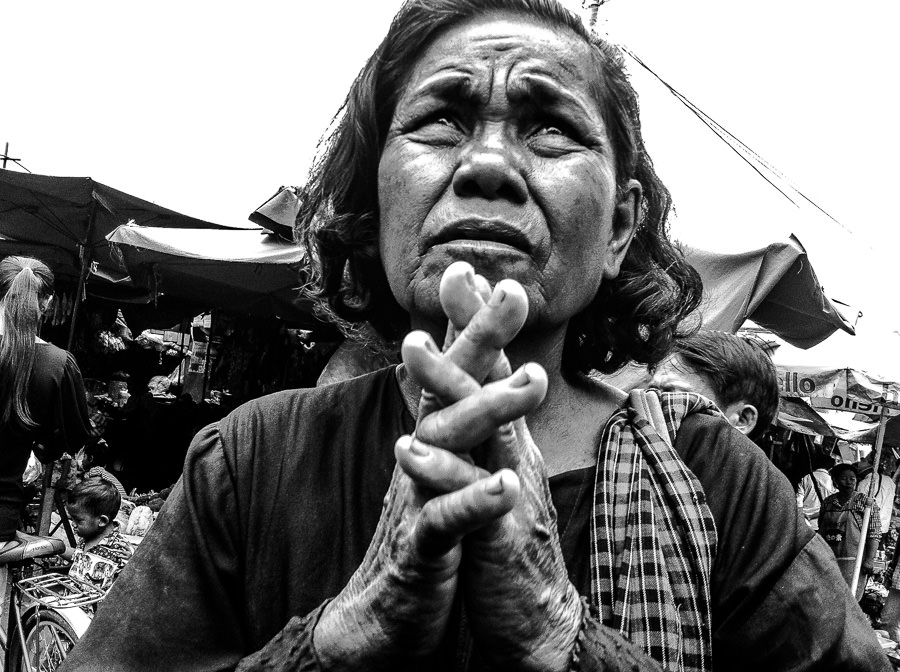 Thanks to www.adrianlandin.com for this photo.

One of my favorite bloggers (www.so-many-places.com) wrote a post a few months ago titled What to do about beggars in India. It ignited a slew of comments from her readers and a very passionate conversation between Adrian and I. You can read about it and join the discussion here.

She eloquently conveys the internal struggle of coming face to face with someone in need, asking for your help and wanting to do the right thing but not really knowing what the right thing is.

There is a lot of evidence that says you shouldn’t give to children begging because it reinforces their place in society as a profit source and ensures that they won’t be sent to school for an education.

Giving to adults with disabilities could be contributing to a begging ring in which the leaders purposefully incapacitate (burn, amputate, blind) people in order to capitalize on human sympathy.

You could give to a charity working on the fundamental issues that address poverty, but how can you be sure they are legit when many of those organizations are corrupt and the money is funneled out for personal interest.

For anyone that wants to contribute, this is absolutely maddening. It would be easy to resign yourself to the idea that things will never change, at which point I’m sure you’d be swallowed by a dark cloud of hopelessness or perhaps the peace of acceptance, I don’t know. I don’t go there. I suppose it is my eternally optimistic personality that compels me to fight for what I believe is possible, however distant or unlikely it may seem.

And now, I’m experiencing a common side effect of long-term travel, a sense of belonging to the world and the world being mine. The global issues we face seem all the more tangible and personal to me now.

Those children you hear about living in poverty with little or no chance of an education? I’ve met them. I’ve wondered into their alleyways uninvited and been charmed by their intense curiosity and bright, lively eyes. They follow me down the path that lay between their bamboo and cardboard houses, giggling as they posture and pile on top of each other so I will take their photo. When I turn the camera around to let them see, they respond with a combination of embarrassment and delight at which we all laugh and gesture and speak, as if we understood each other perfectly. 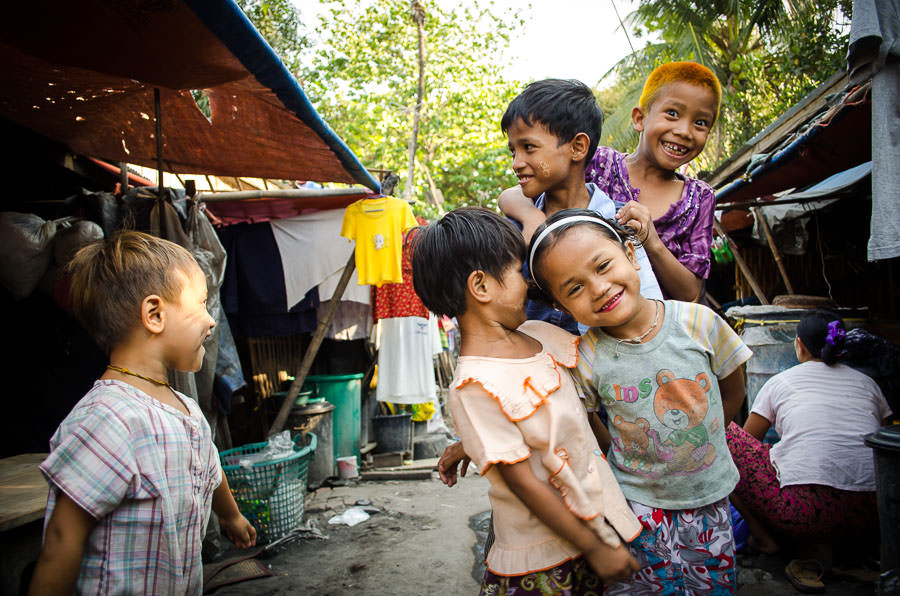 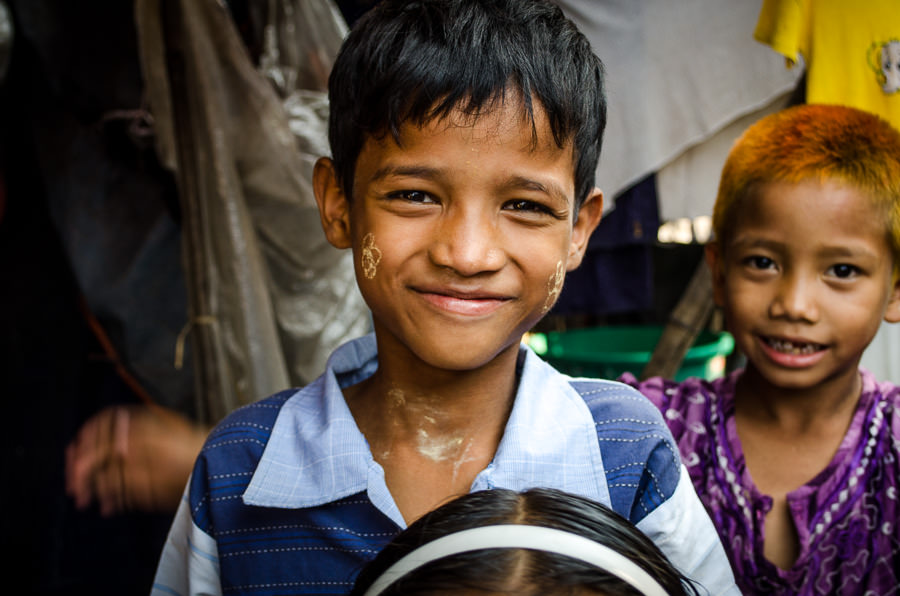 It is an intoxicating experience. When I leave, I take a part of them with me and I feel a responsibility to make the world a little better on their behalf. I can’t explain how this short-lived interaction can have such an enormous impact I can only tell you that it does.

A few days ago someone posted this Gandhi quote in a Facebook group in which I participate. It reads poverty is the worst form of violence. 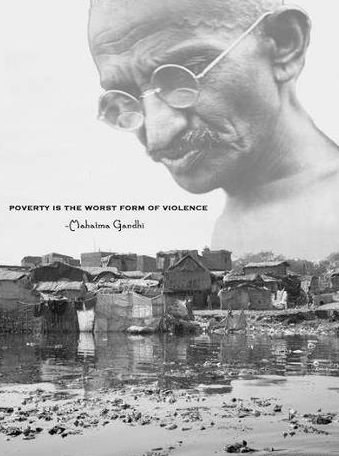 Members began to inquire into poverty as that is the nature of this particular group and everyone shared opinions. It went a little something like this:

Not sure how poverty is the worst form of violence?

Do you mean poverty fosters violence? In Bhutan people are under poverty and still happy.

The violence is that we allow it to happen, or that one entity is dominating another economically.

And then someone commented: there are people who don’t have many material possessions, and yet are happy. Poverty is in the mind.

And I felt my buttons get officially pushed.

The very definition of the word poverty means insufficiency. If you have an insufficient amount of food to feed your family or insufficient amount of money to buy the necessary prescriptions for your sick loved one, you will suffer. That is a very real situation, not one that exists in your mind and while I can appreciate what the person was trying to convey – that we have a choice about how we view our circumstances and we can always choose a positive outlook – in this conversation, it’s bunk.

It’s a cliché to say many people have nothing and are still happy. Yes, that is true and many rich people are miserable, we know. It seems we say this sort of thing so we don’t have to confront the suffering of our fellow humans. We quickly change the channel when those commercials come on showing potbellied babies swarmed with flies. I get it. It’s uncomfortable and it makes us feel helpless. 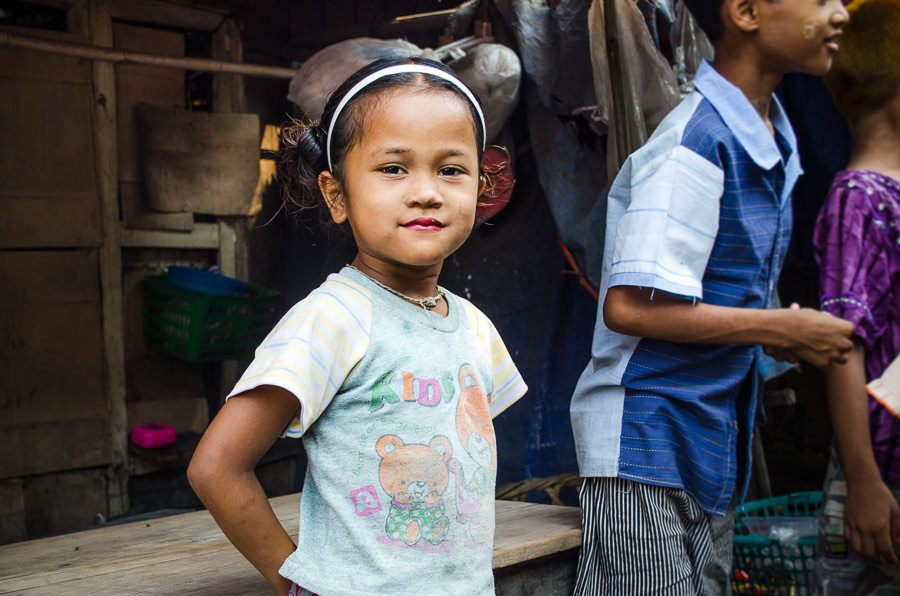 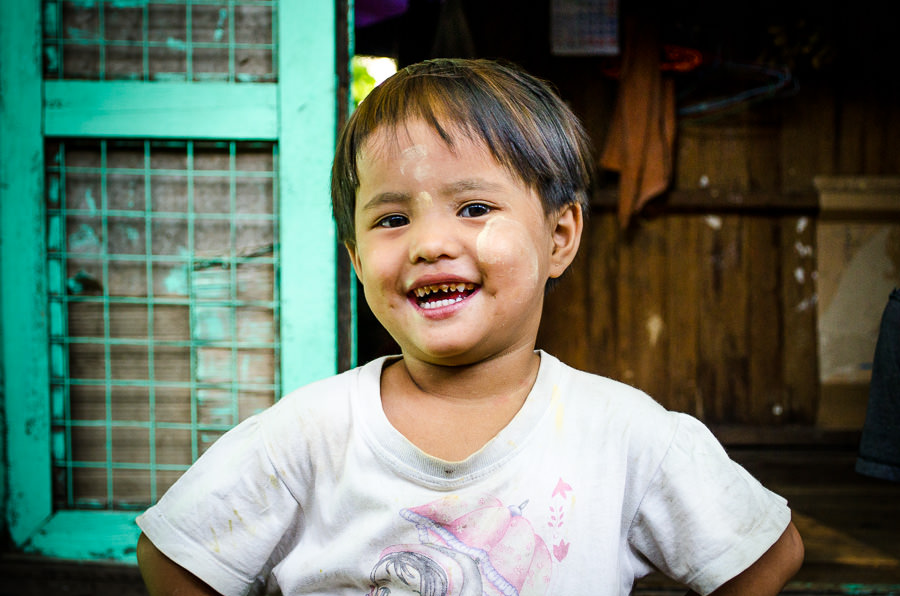 Then there are others who carry this proud banner of life is what we make it, it’s up to us, as if all poverty is self created and people could find their way out if they were only willing to work hard. While I agree we have a lot of influence in the direction of our lives that doesn’t take into account the conversations that people are born into, the corrupt political systems that dominate them or the very lack of resources and opportunities they have.

Last year people wanted to publically stone President Obama for saying that if you’ve got a business – you didn’t build that. You, alone, didn’t. What he was essentially saying is that you benefit from being part of a country that supports entrepreneurship and free market, from a government that provides safety, regulation and infrastructure and that you are not an island. Without the whole you wouldn’t be where you are today and that doesn’t negate the fact that you probably worked your ass off. Regardless of your political stance surely you can see the merit in that statement. Pack up all your ideas and hard work and bring them to India and let’s see how far you get, particularly if you find yourself in the lower castes or demographics of this society where the cards are stacked against you.

I guess I’m just sharing my own struggle to reconcile the inequality I’m being exposed to and the questions I just can’t ignore. 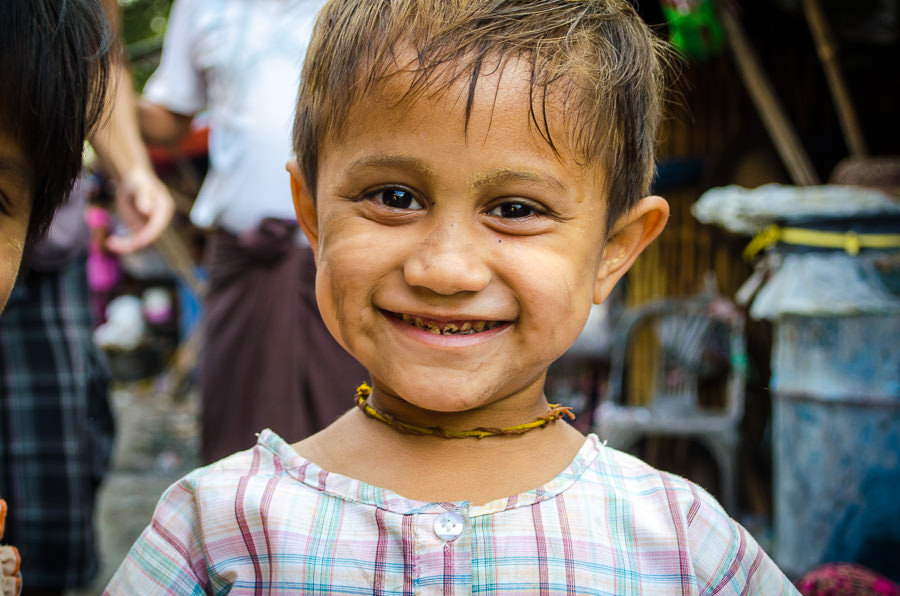 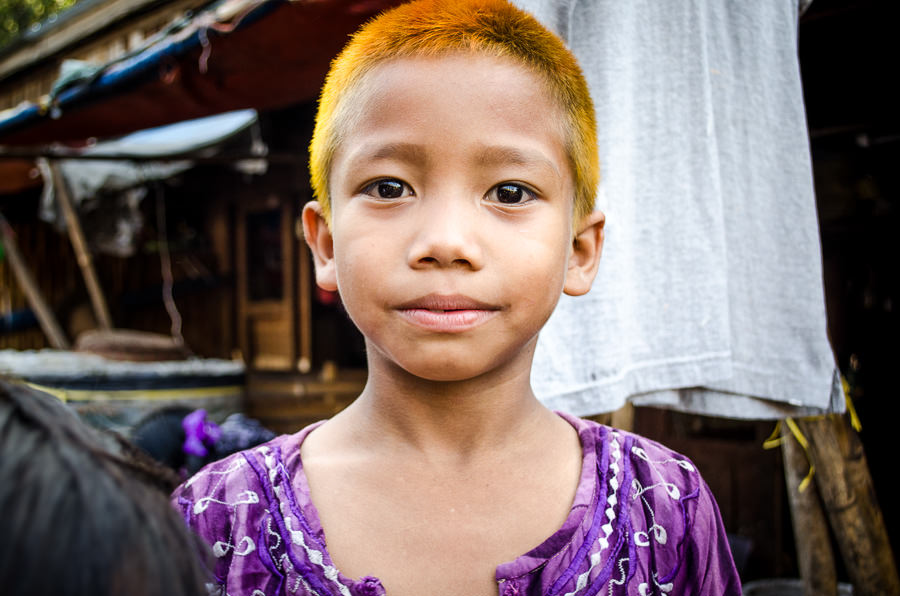 Last week, I turned on the TV in our hotel room to surf for an English channel when I came across TLC. They were showing some sort of reality program and, of course, it was like a train wreck that I watched for about five minutes before forcing myself to change it. The scene showed a well-to-do mom flitting around between various appointments in preparation for her little girl’s sixth birthday party. The three-tiered cake was going to cost a whopping $2,800 and she initially hesitated because she had already spent over $3,000 on the custom scroll invitations that were to be hand delivered. But, it’s what the little girl wanted so how could she say no?

I don’t want to feel animosity for this mom but, initially, I do. I want to reach through the TV and slap her. What the hell is wrong with you? But eventually I recognize that is just my own self-righteousness and I let it go. I have nothing against having money or spending it on things that bring us pleasure – at all. That sort of excess just appears ridiculous to me here, in India, where I’m continuously confronted by people lacking the most basic human necessities. 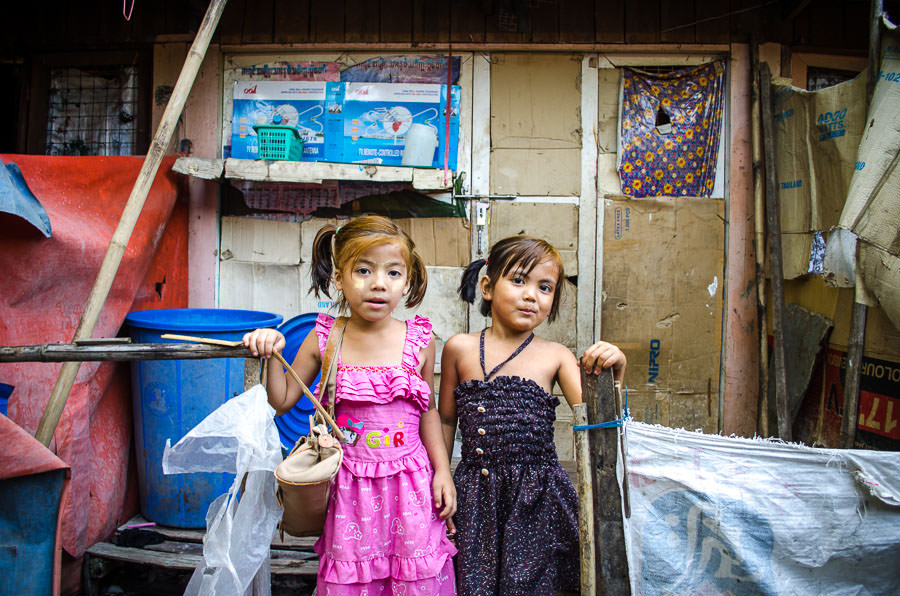 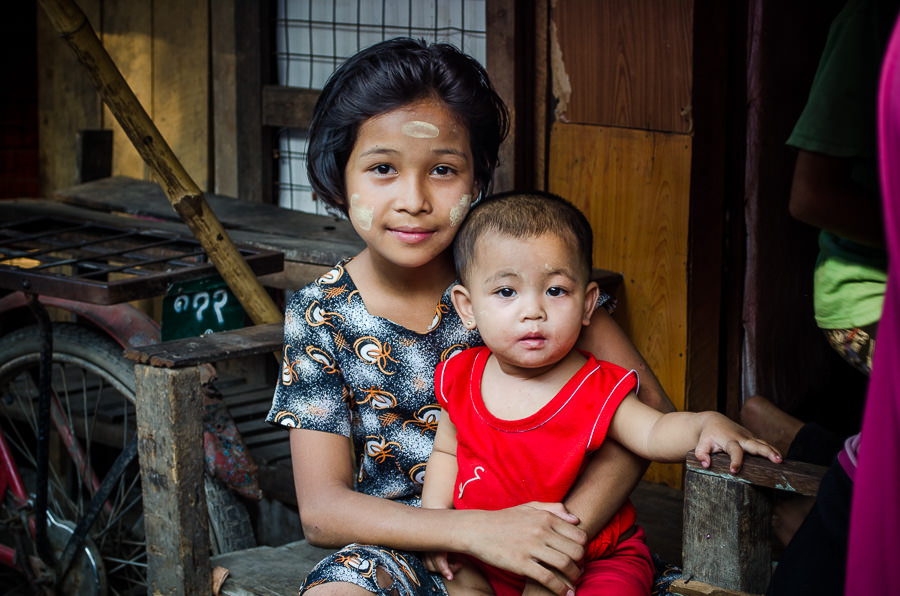 I just completed a book called Behind the Beautiful Forevers: Life, Death, and Hope in a Mumbai Undercity. The author is a journalist who has been reporting on poverty throughout her career and spent three and a half years in one of Mumbai’s many slums. She followed the people living there and did extensive research in order to present their stories. It’s provocative and difficult to read. I actually began it back in March and quit halfway through because I found myself infuriated by the injustices and depressed by the amount of oppression these people were under. I picked it back up once we arrived in India and I’m glad I did, it illuminates many things about the culture here and what people are dealing with.

The more I learn, the more questions I have. Although the most pressing one seems to be what can I do, however small, to help alleviate suffering and the causes of that suffering? What is my piece in this puzzle?

Have you come face to face with poverty? How did it impact you?

About the Author
Ashlie was born in Big Spring, Texas and has claimed Dallas as her home for the last 10 years. A life long love of travel, a healthy dose of curiosity and a desire to discover other worlds has set her off on the adventure of a lifetime. She takes with her a passion for photography and a commitment to make a difference wherever she goes.
Social Share
22 Comments