Serenity Amidst A Sea Of Haze

Thailand. My love. My heart. Always has been. Always will be. But living here, I’m now privy to a few things that suck about Chiang Mai. Number one on that list, and I’m not sure there’s a close second, is the traffic… and its consequences.  Once a city that felt more like a lazy town ‘up near the mountains’, there are now corners, streets and neighborhoods in Chiang Mai that offer the same chaotic hustle and bustle as its big brother, Bangkok. 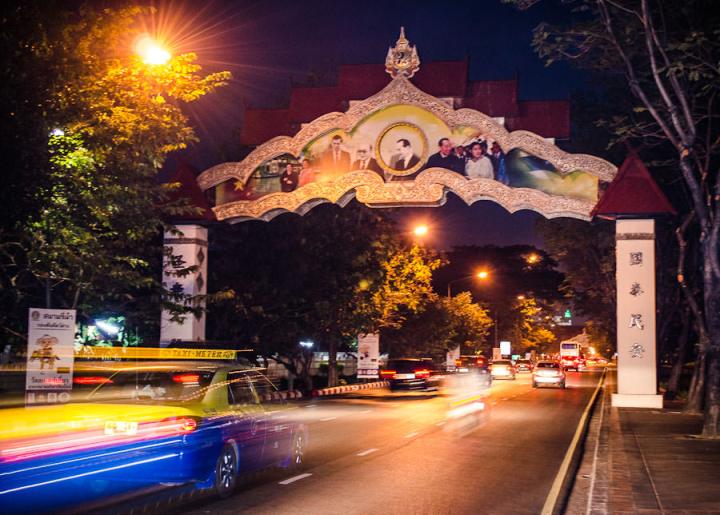 My first time here in 2004 it never took five minutes to strategically ‘Frogger’ myself, lane by lane, across the city’s main, one-way avenues. Mustering up enough courage is now needed on a daily basis just to cross the swarming streets surrounding the old city. Granted it is currently high season, the traffic today is frustratingly fast and congested. Couple that with the non-regulated emissions here, and you’ve got an air quality that is alarmingly potent.

After recently recovering from a throat infection, which I firmly believe the exhaust and carbons to be the culprit, I now ride my bike with a bandana tied tightly around the bottom half of my face. It’s warm, sticky and at times feels like I’m being smothered, but it definitely lessens the burn in the back of the throat while cruising around town. Many locals cup or palm their mouth and nose with their bare hands while simply walking down the street or through the markets. Plenty of tuk-tuk and red truck (taxi) drivers work their long-hour days with surgical masks wrapped around their ears, sparing their lungs from the gray plumes of haze that drift throughout the city. Smoke season, the time of year when farmers here in the north burn miles and miles of farmland in preparation for the new season’s crops, is also among us. Producing even more hazy and hazardous air. From what we’ve heard, the air quality here in March and April can be, at times, unbearable.

On the contrary, one of the bazillion things that doesn’t suck about Chiang Mai is the morning, the peace and stillness before dawn. A calm descends, the exhausted streets rest, the break of dawn here represents, and thankfully gives, a desired breath of more pure air. The morning of our 5 a.m. wake-up call, we were up, alive and eager to get a bird’s eye view of 12,999 monks. What would undoubtedly be a spectacular sight, we might just have enjoyed the before-dawn-bike-ride equally as much. One that did not feel daring, one that excluded plowing through the fumes of hundreds of other cars, mopeds and tuk-tuks.

It was 5:40 in the morning and still dark out. Sleeping streets were still dimly lit by the shine of a half moon. The air refreshing, exhilarating. Those long narrow streets, for once, felt like they belonged to us. On our way to one of the most spiritually compelling gatherings that either of us had ever witnessed, and for the first time in Chiang Mai, we were able to glide through empty streets and intersections like carefree kids on a playground. You have no idea just how badly that was needed, making the city feel like it was more ours.

As we approached the area where the giving of alms was to take place, the traffic thickened. Stacks of cars, buses and motorbikes queued for parking. We conveniently weaved our way in, out and around the bumper-to-bumper traffic until we found an available light pole in which to lock our bicycles.

Hauling their overflowing trash bags and cardboard boxes filled with noodles, rice and water, we were quickly engulfed in the sea of Thais. We, too, had a backpack, but it was filled with the camera, lenses, and our jackets. Conveniently, the sidelines of the street were sprinkled with local vendors ready to capitalize on the less prepared (us). We quickly maneuvered ourselves over to one of them and bought a plastic bag full of non-perishable foods to offer, then swiftly swam back into the current of the crowd. 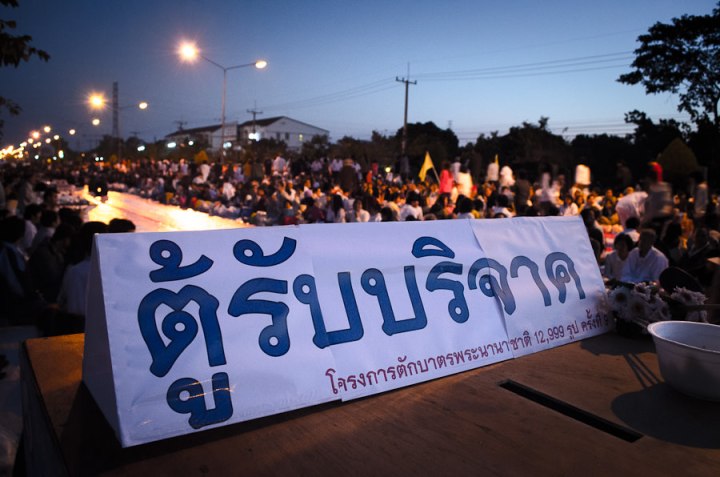 Eliminating me and the camera from being stood in front of, this four foot high donation box was my crutch throughout the ceremony. 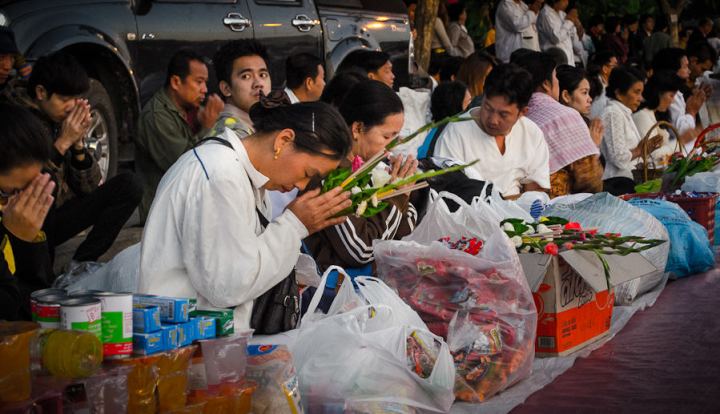 An abundance of people, prayer and offerings. 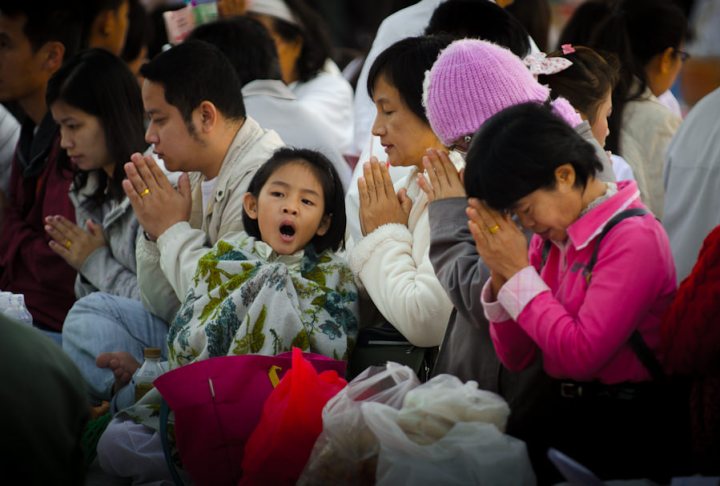 Yawning and cold, her hands remained in prayer form. 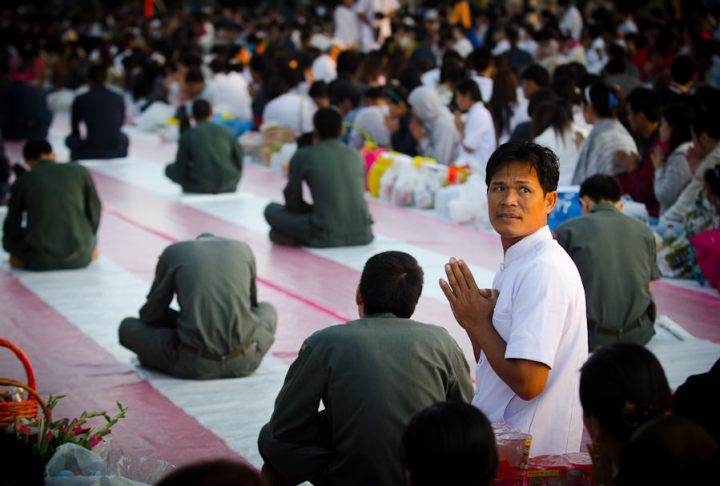 Ray of sun beaming through the tall trees and onto the face of a volunteer.

Waves of locals continued crashing into the streets. While softly shouting and motioning to the people to move forward or sit down, the volunteers responsible for crowd control were struggling to be in the least bit effective. There were simply too many people. But, climbing over the horizon, the awakening of the sun calmed the impatient energy. Noisy whispers from the crowd all but fell silent as tens of thousands of Thais began to close their eyes, bow their head and press their hands together in prayer form.

Off in the distance the orange and other brightly colored robes began inching themselves towards us. The choir of chirping birds gave way to the chest-rattling bass of the traditional Thai gong. Gong, gong. Then silence again. Followed by beautifully hypnotic Buddhist prayers being sang over the loud speaker, then repeated, in unison, by the entire crowd. Then gong, gong, gong.

Side by side, in four separate single-file lines, 12,999 barefooted monks peacefully roamed before us. It was simple, yet spectacular. Buddhism’s tranquil energy and presence had filled that morning’s air so seemingly thick and mushy that a dull butter knife could’ve sliced it into tiny little pieces. 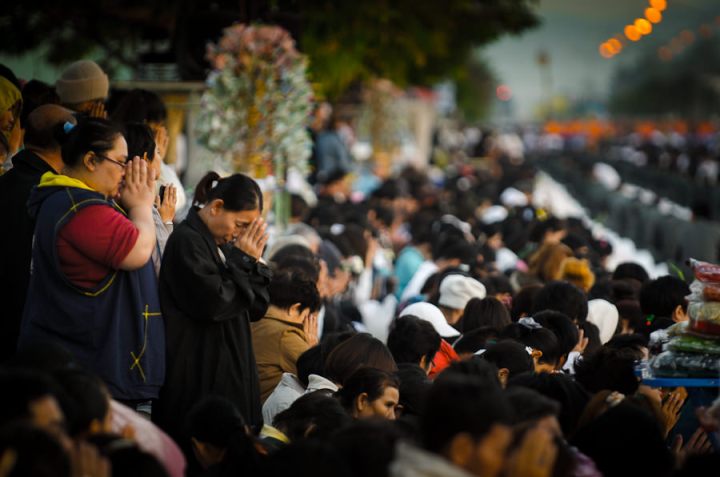 The prayers, the gongs, the monks approaching from the distance. A moment that felt as if we were in the scene of a film. 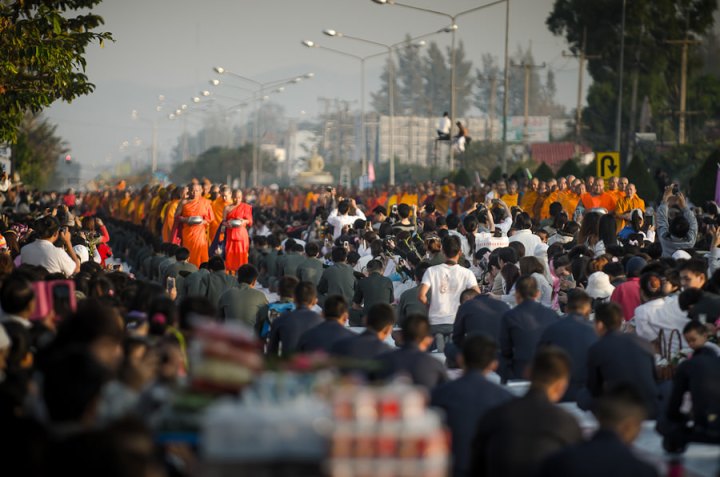 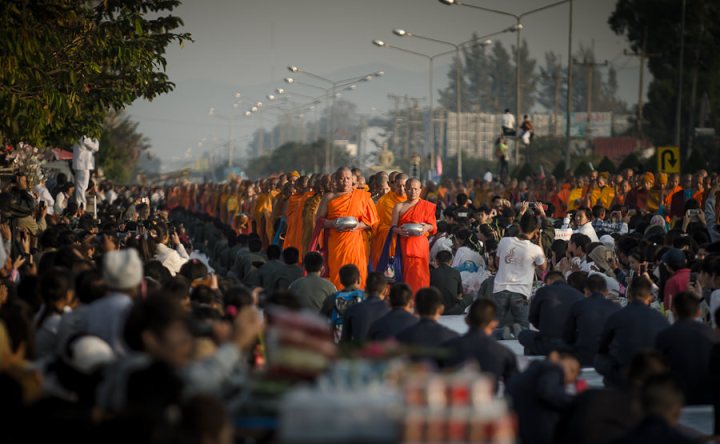 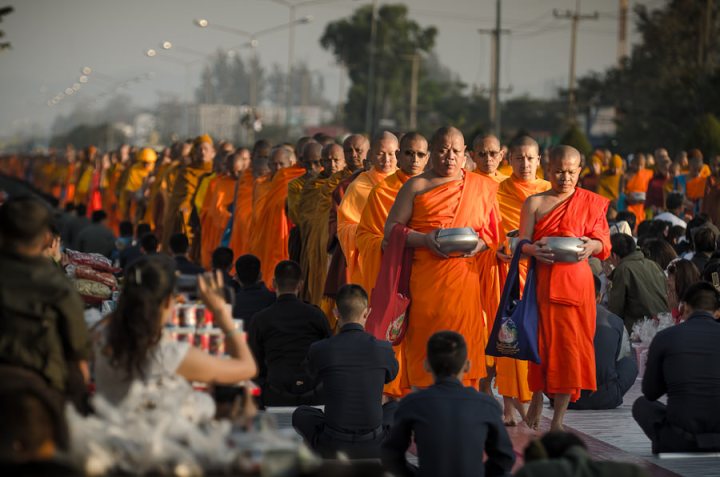 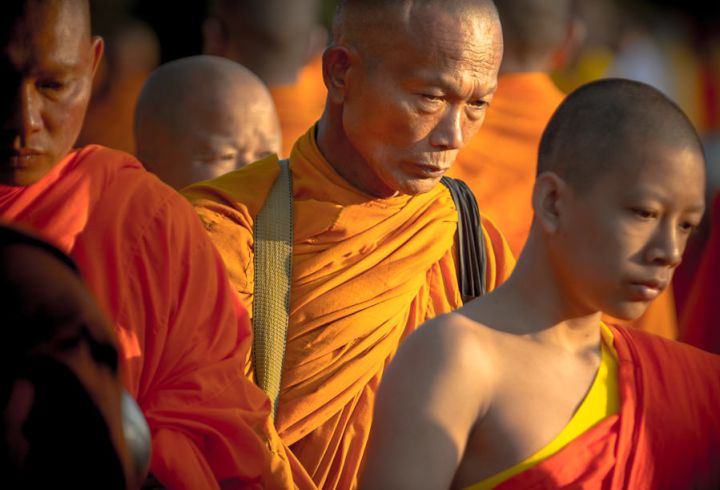 The agelessness of monkhood. 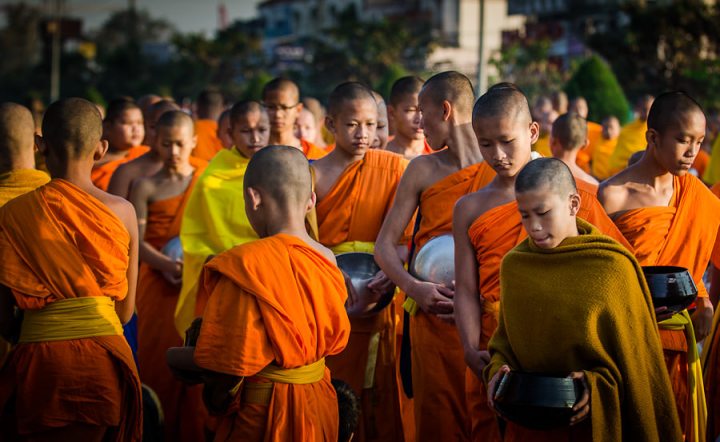 The mile long line moved forward and wrapped itself back around as methodically as an army of ants. 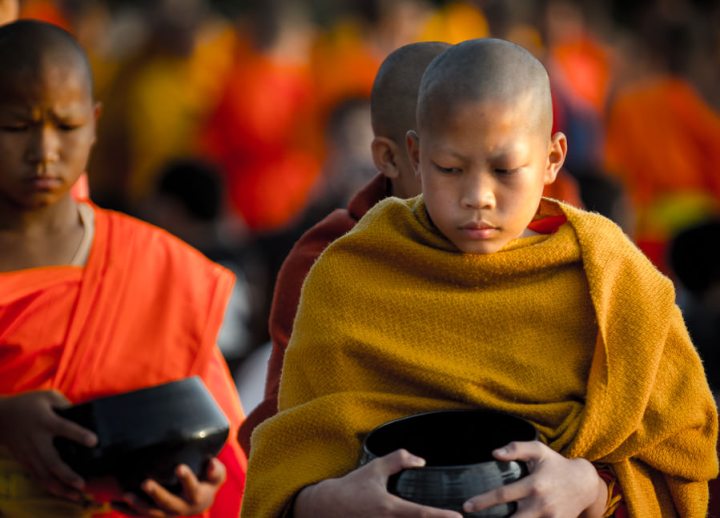 A Golden Child. The color of robes differ from sect to sect. 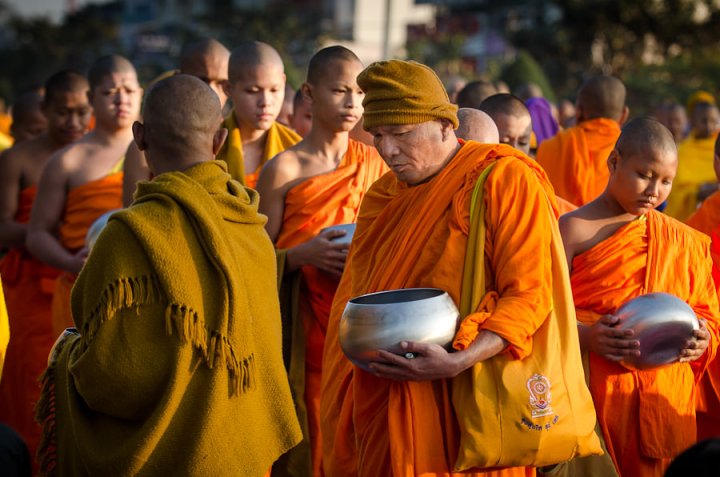 One of the few with a hatted head. Shaving of the head in Buddhism symbolizes the departure from household to homelessness. 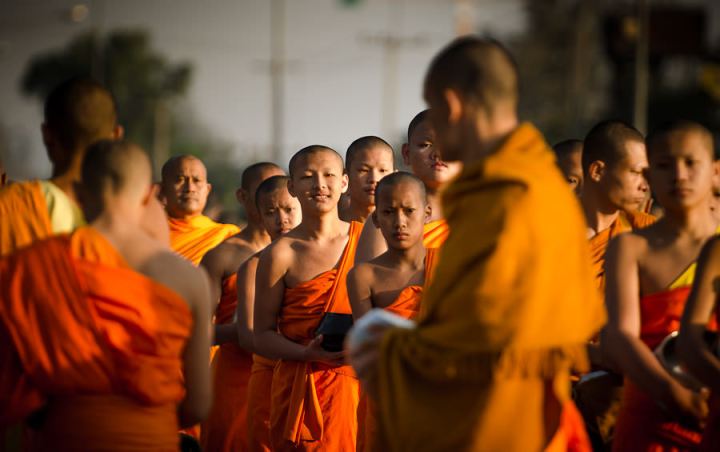 Devoted worshipers patiently waited their turn to fill the monks urns with food, flowers and money. I saw wrinkle-faced women holding themselves up by their wheelchairs with envelopes full of Thai Baht, handing out 20’s and 50’s to the meek-natured monks. As the bongo sized urns filled up, the monks would systematically turn and empty them into black trash bags being held up by policemen. The gorged trash bags would then be labored into the back of awaiting pick up trucks – which would ultimately be transported and delivered to the hundreds of temples scattered across northern Thailand.

Shoulder-to-shoulder crowd levels forced Ashlie and me to witness the majority of it all separately, we later agreed that during those moments, while all of our senses were so heightened and present, we both were struck with the same flare of emotion. As with most religions, sadly, Buddhism in Thailand has fallen victim to exploitation and commercialism. Evidence of this is not hard to uncover. However, on this morning we didn’t see, feel, hear or smell anything of the sort. We experienced the young, the elderly and all ages in between, paying their deep respects to a Buddha, a religion and a Nation that defines them. It was perfect, unsullied. Complete.

Though it happens every year, this genuinely felt like a once in a lifetime opportunity. And, maybe the only day of the year in Chiang Mai when a street so overly crowded and congested could produce an air that is so pleasant to breathe. 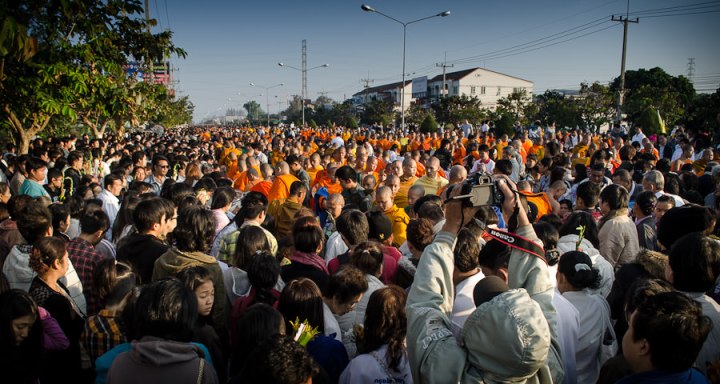 The sea of Thais patiently wait their turn to get up-close and donate their prayers and offerings.